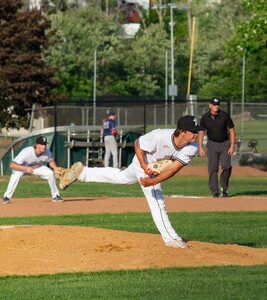 DANBURY, CT—The Danbury Westerners dropped their 2021 NECBL home opener to the Valley Blue Sox on June 5 by a score of 12-7.

Danbury got on the board first in the bottom of the second as right fielder Connor Harding hit a two-run home run in his first at-bat of the 2021 season, but Valley’s first baseman Luke Franzoni hit a three-run home run in the top half of the third to give the Blue Sox a 3-2 lead.

Danbury Designated Hitter Justin Kapuscinski tied the game at three apiece in the bottom of the third, driving in shortstop Sebastian Murillo with an RBI single to right-center field. First Baseman Will Gersky made the scoreboard read 4-3 Danbury an inning later with an RBI single.

Blue Sox left fielder Brian Hart hit Valley’s second home run of the night in the top of the fourth with a two-run shot to make the score 5-4 Blue Sox.

Luke Franzoni continued his offensive onslaught in the top of the seventh by hitting an RBI double to left field to give the Blue Sox a 6-4 lead, but a solo home run from Justin Kapuscinski cut the Valley lead to one run in the bottom of the seventh.

The Blue Sox added on five more insurance runs in the top of the eighth inning for an 11-5 lead. Brendan Hueth hit a two-RBI single, and Travis Holt had a run-scoring single of his own before a two-run home run from the Blue Sox catcher Jake Balderston.

The Westerners threatened in the bottom of the eighth after four straight walks from Valley pitcher Alexarmando Diaz. Connor Harding scored on the fourth walk from Sebastian Murillo, but the bases were left loaded after back-to-back swinging strikeouts from Nick Lorusso and Justin Kapuscinski.

More Valley reinforcement came in the form of a towering home run from Brian Hart in the top of the ninth, his second of the night. Danbury got an RBI groundout in the bottom of the ninth before catcher Dylan Kim struck out to end the game.

Angelo Tonas got the loss for Danbury after giving up four hits and five earned runs over three total innings. Six Westerners Pitchers combined for four home runs and eight walks during the game.

“We need to get ahead of counts,” Westerners Pitching Coach Conor Farrell said after the game, “In pitching, you have to throw the first pitch strike, and if you don’t, you get bad ball counts. That’s where hitters can make adjustments.”

The Westerners will travel to Mackenzie Stadium in Holyoke tomorrow night to face off in a rematch with the Valley Blue Sox. The game starts at 5:05 PM and will be live-streamed on the NECBL Network.