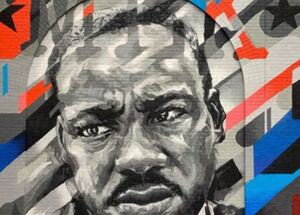 RiseUP for Arts/CT Murals is partnering with CityCenter Danbury, DaSilva Realty, and the City of Danbury to paint a large-scale mural overlooking Kennedy Park that honors John F. Kennedy, Martin Luther King, Jr, and Ruth Bader Ginsburg.  The mural will be painted by internationally recognized and Connecticut native artist, ARCY.

Painting will commence on July 26th at 300 Main Street with an unveiling ceremony scheduled for 2PM on Monday, August 2nd.

Artist, ARCY, titles the mural, "Legends Live Forever.”  And states, “Throughout history, many have created change, many have left their mark. Through the echoes of the past, we find pride in our predecessors, we honor their story, we communicate their words, and we display their actions. Dare to Dream, Believe to Inspire, Strive for Justice.”

This mural project is funded by CityCenter Danbury and organized by RiseUP for Arts as part of a partnership to expand public art in the Downtown District.

CityCenter Executive Director Angela Wong believes, “this is another exciting step towards bringing more art, culture, and vibrancy to downtown Danbury. Since moving to Danbury six years ago, I have often stared at that wall believing it was an ideal canvas to support an ambitious and meaningful project such as this.”