The Story of the Candlewood Lake Authority 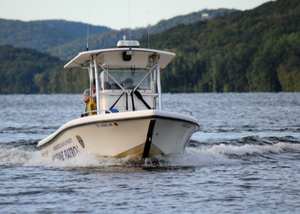 For 16 years I have lived on Candlewood Lake, the largest body of water in Connecticut which takes up 8.4 square miles of Fairfield and Litchfield County. Residing on the shores of one of the most active passageways between Brookfield Bay and Chimney Point, I have seen all types of watercraft: civilian motorboats, jet skis, sailboats, and even the famous Candlewood Lake pirate ship. But what I have possibly seen the most has been a constant flow of vessels with paint on the side spelling out “Candlewood Lake Authority Marine Patrol.”

Founded in 1972, Candlewood Lake Authority and its Marine Patrol wing have been “preserving and protecting Candlewood Lake” for 49 years. Despite the Authority’s generational presence on the water, patrons have always been unsure about what exactly it does to keep them and the lake safe year-round.

The primary goal of the Candlewood Lake Authority at its very beginning was to serve as the Candlewood Lake law enforcement agency. Much like Connecticut police except with no weapons, the Lake Authority patrols to make sure that the lake’s users are abiding by the rules set forth by state and local jurisdictions so that they can keep themselves and others safe. In addition to hosting webinars and utilizing its social media platforms to keep the public in the know of the rules of the lake, Candlewood Lake Authority has an informative “What Boaters Need to Know” column on its website with many laws that I as a boating license holder did not know but am now glad to.

Since the 1980s, the Authority has expanded from primarily enforcing the laws of the lake to addressing environmental causes as well. Faced with the rise of pollutants, invasive species, and the decline of water quality, Candlewood Lake Authority works on environmental issues through hands-on sustainability work and education. At any point during the year, you may see the Authority hard at work stocking the lake with grass carp to manage invasive milfoil, taking water chemistry samples, or of course searching for zebra mussels, a harmful species that the lake would be fortunate to go without.

To ensure the lake and its patrons are safe and healthy, the organization’s members engage in on-water and ramp inspections of watercraft and occupant activities. The majority of these stops are influenced by probable cause that a rule has been broken or by patrons requesting inspections themselves. However, the Candlewood Lake Authority also engages in random inspections. Many lake goers are displeased with this practice. To create an understanding, I reached out to the Connecticut Department of Energy and Environmental Protection, the supervising agency of the Candlewood Lake Authority.

According to Will Healey of the Department, “CGS 15-154(b) allows law enforcement officers, including State Environmental Conservation (EnCon) Police Officers and Lake Patrol Officers, the authority to stop and board any vessel which is underway or moored on state waters…” Reasons for these stoppages include examining decals, certificates and other documents, inspecting safety equipment, and determining if a vessel exceeds noise levels. The organization adds that “Having these inspections helps to make sure that every boat operator is prepared, and these inspections help to ensure compliance with state laws.”

Ensuring that watercraft have the correct safety equipment has increasingly become one of the Authority’s most important purposes. “There have been six boating-related fatalities on Connecticut’s water bodies so far this year, the most we’ve had in four years,” Will Healey of the Connecticut Department of Energy and Environmental Protection states. “In some of those incidents, safety equipment such as life jackets were not worn… It is important to always make sure you have sufficient safety equipment in good working order before going out on the water, to know where it is on your vessel, and how to properly use it.”

The Candlewood Lake Authority is vital to Candlewood Lake and its community. One must trust the fact that the Authority and its members always have the best intentions when going about their daily activities. To learn more about the group, you can visit its website or Facebook page.