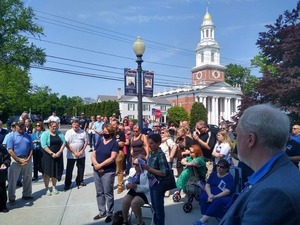 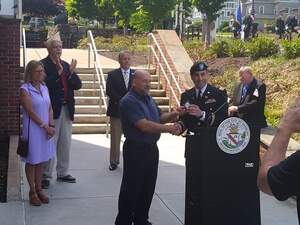 The dedication ceremony for the Danbury Hometown Heroes Banner Program which was held at Danbury City Hall on Saturday, Armed Forces Day, was attended by hundreds who honored their local heroes and showed their support for our service members in the armed forces.

“I was very impressed with the large gathering of people who attended the event,” said Program Coordinator Lee Teicholz. “It shows that Danbury continues to be a community which strongly supports its veterans and appreciates the sacrifices that they make for us to preserve our freedoms.”

Maggie Cortese sung the National Anthem, taps was played by Albert Russo, the 3-volley salute was done by the Danbury Police Honor Guard, and Deacon William Murphy of St. Gregory The Great Parish did the invocation and benediction.

The sixty-two banners honoring local service members, both past and present, were installed on city owned lampposts prior to the ceremony along White Street and at Danbury City Hall and will be displayed through Veterans Day.

Banners for the 2023 display year are currently being sold. Information about the program can be found on the website www.danburyhometownheroes.org or by contacting Veterans Affairs Director Dan Hayes at the Danbury Veterans Affairs Office at (203) 797-4620.