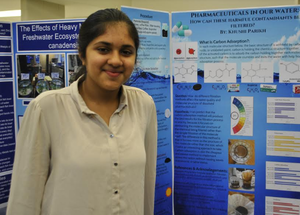 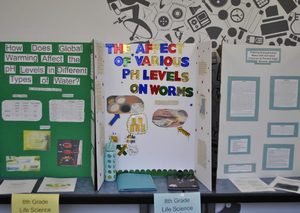 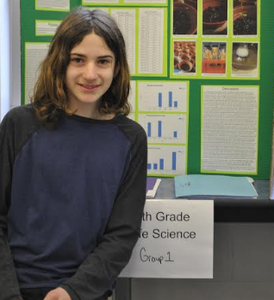 It was at a local farmer’s market that Carter Densk, an eighth-grade student at Westside Middle School Academy, was introduced to an apple that didn’t turn brown when it was cut into. The possibilities of genetic engineering so intrigued the middle schooler that he modified his own apple – one that will grow faster and larger due to his intervention.

Last year eight of ten WSMSA students were selected as finalists in the state competition, making WSMSA the most successful middle school in the state.

At WSMSA on Jan. 18, 150 students had the chance to show off their projects at the Science Fair held in the school’s main hallway and cafeteria while nearly two dozen judges, including scientists, engineers and teachers, viewed their projects and asked questions. Started in September, the projects had to involved physical or life science, or engineering.

Like a scientist at work, Carter explained the complexities of his hands-on research. His project involved extracting the DNA from two types of apples and injecting it in different concentrations into apple seeds. He learned from this the highest average growth ratio.

“It was cool to see them modify an apple to what they wanted,” Carter said. “This is a good thing, . . . it could help bring more food to people who need it.”

Seventh-grader Khushi Parikh investigated pharmaceutical contaminants in the water supply, and whether and how they can be filtered out.

“There is a heathy amount of pharmaceuticals that you can have in your water, which is .03%,” Khushi said. Pharmaceutical dumping and flushing exceeds that by almost double.

She came up with four methods of filtration using accessible items. Her research included contacting employees at Boehringer Ingelheim and a biopharmaceutical student.

The Connecticut Science and Engineering Fair will be held in mid-March at Quinnipiac University in Hamden.