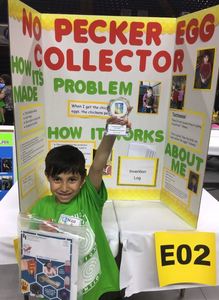 King Street student to get patent sponsored by UCONN

He may only be five years old, but experience has already taught King Street Primary School student Nico LaRosa that necessity is indeed the mother of invention.

Nico’s family chickens have a habit of pecking his arm fairly aggressively ‑ leaving him no choice but to find a solution, hence the “The No-Pecker Egg Collector.”

“When I would collect the eggs, they would peck at me,” Nico said. A chicken named Maniac was the worst, leaving Nico to create an impenetrable sleeve that would leave just his hand free to pick up eggs. “Now I'm not scared they're going to peck me.”

The egg collector started out as part of the school district’s invention convention. Nico’s invention was then selected at the regional competition to enter the statewide convention held annually at UCONN Storrs.

A recognized inventor at the UCONN event in May, Nico was again selected to move forward - this time to the nationals in Alexandria, Virginia.

The Invention Convention is part of the science curriculum. For three weeks students engage in coming up with ideas and putting them into motion. One of the crucial learning curves for students is to figure out how to solve problems with their inventions and tweak them to perfection. The invention convention fosters interest in Science, Technology, Engineering and Mathematics learning for students from kindergarten through eighth grade.

Gwen Gallagher, assistant principal at King Street Campus, said that Nico was one of 10 students in an afterschool program designed to help students with their inventions. He was the only student from the school to go to the regionals.

More than 300 students from 16 states competed at the invitation-only event held at the headquarters of the U.S. Patent and Trademark Office. Connecticut was the largest delegation with 91 students.

The University of Connecticut at Storrs has offered to fund a patent for Nico’s invention. Nico is the son of Andrea and John LaRosa and the brother of Lucas, also a budding inventor.