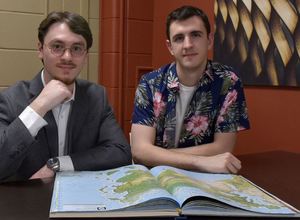 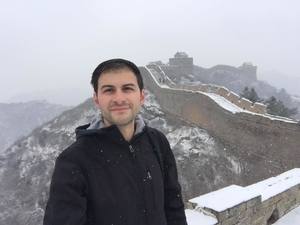 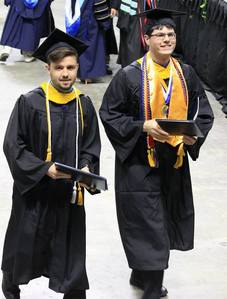 Three area residents heading overseas this year to accept teaching appointments in the Far East share a common debt of gratitude to Western Connecticut State University for the academic and practical training that has prepared them for these challenging assignments.

All three students who pursued undergraduate studies at WCSU have accepted positions to teach English as a second language at educational institutions in Asia. Anthony Asmar, of South Windsor, recently departed for China to begin a one-year assignment at the Nanjing Studio English Classroom, a school serving more than 1,000 students ages 5 through 15. Tyler Poeti, of New Milford, also will travel to China in June on a one-year appointment as an English teacher at a Kids and Teens Center for children ages 3 to 17 operated by EF Education First in Shanghai. Mark Paskell, of Patterson, New York, will begin his assignment this fall in Japan as an assistant language teacher in the elementary, middle and high school program managed by the educational company Interac.

Asmar, who received a B.A. in Spanish and a B.S. in Justice and Law Administration with a concentration in criminology in 2017, observed that his education at WCSU “has prepared me for a career as a teacher in a foreign country.” In his new assignment teaching at the only English-language education center registered with the Education Bureau of Nanjing, a metropolis with a population of approximately 8 million, he already has earned international certification as a Teaching English as a Foreign Language (TEFL) instructor and will teach English “through the approach of creating a fully immersive language environment.”

Asmar brings a strong interest in learning about the Chinese language and culture, inspired by his undergraduate studies at WCSU in several languages including Spanish, French, Italian and Arabic. “Given China’s ever-increasing importance in the geopolitical sphere,” he said, “I am confident that living in China and adding Chinese to my repertoire of languages will serve my future career goals of one day working in the field of international law and politics.”

Asmar said that his involvement in the Kathwari Honors Program and mentoring by the program’s director, Professor of Political Science Dr. Christopher Kukk, motivated him to pursue study abroad through the International Student Exchange Program (ISEP). “That experience instilled in me a greater appreciation for cultural awareness and cultivated an incurable case of the travel bug,” he remarked.

Poeti, who received a B.A. in Spanish with minors in Latin American and international studies at WCSU in fall 2017, expressed enthusiasm for the opportunity to teach in Shanghai, China’s most populous city with more than 23 million residents. ”Our world becomes more connected every day, and global awareness is a skill that is hard to obtain without traveling,” he said. “This teaching assignment will open my mind to a whole new culture and continent that I have not studied previously.” His immediate objective is to build upon his international experiences to pursue a master’s degree in a field such as translation or TESOL (Teaching English to Speakers of Other Languages), with a future goal of entering a doctoral program.

Poeti recalled that he did not venture far from home prior to enrolling at WCSU, where he took the opportunity during his sophomore year to study abroad for four months in Buenos Aires, Argentina. He noted that Professors Bakhtiarova and Hawkins in the World Languages and Literature Department motivated him to develop and pursue his own research interests at WCSU, including an independent study course in second-language teaching and an honors teaching practicum. Professor of Anthropology Dr. Robert Whittemore also mentored Poeti during a Fulbright Scholarship application process that awakened his recognition of “my true calling to be a teacher while also traveling the world.” He said that his parents and family also “have been extremely supportive and have given me the freedom to travel the world and follow my dreams.”

Paskell, who received his B.A. in History this spring, observed that he arrived at WCSU without a clear direction in his academic studies. “Without my time at WCSU, I never would have pursued this path in the first place,” he said. “I started with one major, then switched to undeclared, and finally landed with history. My classes and instructors inspired me to become interested in the histories and cultures of other countries.”

His decision to participate in one of the WCSU summer study-abroad programs in Spain organized and led by Bakhtiarova brought his academic and career goals into focus, he remarked. “This was the experience that inspired me to want to travel the world and to pursue teaching abroad.”

With valuable support and guidance from his academic adviser, Professor of History and Non-Western Cultures Dr. Katherine Allocco, Paskell has been assigned by Interac to a position starting this autumn as an assistant English teacher working in the Japanese school system in the Kanto region, located on the main island of Honshu. “Essentially, my role will be that of a language instructor and a cultural ambassador in the classroom and in the community,” he said. “I will be arriving in the middle of the Japanese school year, so I plan to complete that term and then stay on for another full academic year.”

Paskell plans to pursue a career in teaching, anticipating that his assignment in Japan will give him excellent preparation to return to college for an advanced degree in the education field while also providing priceless international experience. He expressed gratitude to his faculty mentors at WCSU, especially Bakhtiarova and Allocco. “I could not have gotten where I am right now without them,” he said.

Asmar, Poeti and Paskell follow in the footsteps of many WCSU graduates who have achieved successful teaching assignments abroad, inspired by faculty mentors and study-abroad opportunities during their undergraduate studies at WestConn. Among these role models are Robert Zoccano III, an East Haven native currently teaching in China; and Steven Kandro, a Shelton native who teaches in Chile.

Zoccano, who received his B.A. in Social Work at WCSU in 2016, has served since fall 2017 as a residence hall teacher at Yew Wah International Education School in Shanghai, providing instruction in English, athletics, arts and other academic and life skills. “My position is very flexible and responsibilities change daily — one day we can be teaching a magic show class, the next a history lesson, and the next going on a field trip to Japan or Australia,” he said.

Zoccano has drawn upon extensive international experience gained during his WCSU studies as an ISEP exchange student in social work at the University of Malta, as well as his service in the Philippines following graduation as a Peace Corps community development worker who taught life skills in rural villages and mentored youths in projects to address widespread poverty and homelessness.

He expects to remain for another year in his Shanghai position and then plans to accept an offer to teach at the New Hope for Cambodian Children orphanage serving HIV/AIDS victims at a rural site near Phnom Penh. His varied roles as an instructor overseas “will help me learn and practice teaching methods that I can later apply in a social work setting,” he said.

He credited his passion for living abroad and learning about foreign cultures to mentoring from Warner and Department of Social Work faculty members including Professor Emerita Patricia Ivry, Associate Professor Dr. Sharon Young and Assistant Professor Rebecca Wade-Rancourt. His present responsibilities at Yew Wah as a dormitory supervisor for Chinese boys of middle school age also have reminded him of lessons learned from Director of Housing and Residence Life Ron Mason as a WCSU dorm resident assistant for more than four years.

Kandro received a B.S. in Justice and Law Administration at WCSU in 2017 and currently teaches English in Chile. He traveled more than 5,600 miles in April to the southern Chilean city of Rio Bueno to begin a seven-month assignment as a volunteer for the English Opens Doors Program, an initiative of the Chilean Ministry of Education supported by the United Nations Development Program. He is living with a host family during his service in Rio Bueno.

The program was founded in 2003 with the mission to improve the level of English knowledge and fluency among students from grades 5 through 12 in the Chilean public school system. “The English Opens Doors Program seeks to foster a new generation of Chilean students equipped with the tools and abilities they will need to succeed in an increasingly globalized world,” the program website noted. Kandro has been assigned as a teaching assistant whose primary focus is to provide instructional support in the development of English speaking and listening skills.