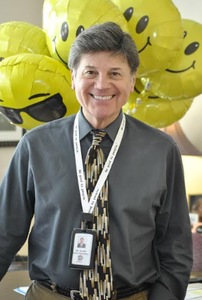 After a lifelong career as a caring educator, DPS Deputy Superintendent says farewell

Dr. William Glass, deputy superintendent of Danbury Public Schools, gave up his childhood dream of becoming a theoretical physicist to work with challenged students and help them rise above the life they were handed. After a lifelong career as an educator, Glass’ track record shows that there are few better suited for the job. Perhaps it’s because anyone who knows him knows that he’s never caught without a smile or a kind word – he’s a cheerleader for the underdog and a supporter of all worthy causes.

Glass, who is retiring this week after 20 years with the district, knows what it’s like to struggle and to need the support of a nurturing adult because Glass himself started out in poverty on the Lower East Side of Bridgeport.

Glass remembered wanting to become a physicist with an emphasis on cosmology since he was a kid, however, contracting scarlet fever at six months old left him permanently deaf in one ear with only 19 percent hearing in the other – and a severe speech impediment. His fifth-grade teacher spent a lot of time working with him to help him overcome his difficulties and improve in school.

But when money got tight, Glass, who had worked part time in a plumbing supply store since age 12, considered dropping out of high school to work more. “Then caring adults came around me and said ‘you’ll be fine’… and I was,” Glass said.

Glass has been widely recognized for his work with children and his leadership skills have been profiled in five books and numerous professional publications. He was also named Educational Leader of the Year for Connecticut, recognized by the United Nations for his work in “waging peace” and for being a National Exemplary Urban Leadership Medal recipient. However, his career started far more modestly many years ago in his hometown of Bridgeport.

“I wanted to work with challenged kids in an urban environment,” Glass said.

It was at Bassick High School in Bridgeport where he started teaching physics and visual arts and stayed for 10 years. Ninety percent of his students came from families that fell below the poverty level.

One year he and his teaching partner saw students coming to school in the winter wearing t-shirts and denim jackets with no coats, gloves or hats.

“So we went to a local department store and bought 140 knit hats and handed them out,” he said. “We put hats on their heads when they walked in before we ran out of hats.” They eventually went back to the store and the store donated the rest so that all 250 students had blue knit hats.

However, his favorite story is when he was handed a class of high schools students who all failed the previous year. The principal asked him to “try and get through to them,” Glass said.

Glass, who believes that everyone can learn in the right environment, said those students needed someone who cared. And Glass did.

“There’s a saying that kids don’t care how much you know until they know how much you care. None of the kids cared what I knew about anything,” he said. “They thought they were throw-away kids.”

“They started seeing how much I cared about them,” he said.

But they didn’t think they were smart, he remembered. “So I asked them what smart people do? And surprisingly they said, ‘Smart people play chess.’”

Glass went out and purchased a dozen plastic and cardboard chess sets and told them it was like playing army with the white army fighting against the black army. This thought captivated their imagination and they wanted to learn how to play. For six months, they improved their skills and started the school’s first chess team. After three years, the team competed throughout Fairfield County against teams with team jackets and pewter chess sets. Within five years, it was the number one chess team in Fairfield County.

“Five years from the day we started, we became the first in Fairfield County and got team jackets with the money,” Glass said. And that first year every student passed at least one class. “They knew they were smart now.”

Glass said coming to Danbury was a little different than Bridgeport, mostly because of its diversity.

“We are most the culturally and linguistically diverse district in the state,” said Glass, citing the fact that on average 45 languages are spoken in the district.

Despite being 169 of 169 districts in per pupil spending in the state for the past several years, Glass said he’s also seen enormous growth in a district that is mostly thriving, despite its financial woes.

“Twenty years ago the elementary schools were small, intimate settings,” he said. Now they are at capacity with more than 600 students at Park Avenue and close to that number at Shelter Rock and Stadley Rough. The district has accommodated the growth with redistricting and some modular classrooms. An addition last year to the high school will accommodate 500 more students over the next several years.

But despite the financial woes and explosion in school population, Glass said the district has continued to make strides. In the recent past, six schools were named schools of distinction by the state; Shelter Rock School was named a ConnCAN school of excellence, the Academy of International Studies was named Elementary School of the Year by the Connecticut Association of Schools and this year Morris Street School – once the lowest performing school in the district – was selected as a National Blue Ribbon School of Excellence– an honor that is completely unsolicited with the U.S. Department of Education selecting a small percentage of schools every year based on a stringent set of criteria, including marked student scholastic improvement.

“In spite of the lower per-pupil funding and a significant increase in poverty (roughly from 33 percent to 54 percent during his tenure) and an increase in English language learners, we’ve ended up with all these accolades,” Glass said. “It’s because of outstanding teachers and leaders – and teaching that identifies specific student learning needs and uses great strategies to teach to those needs.

“I hope as we continue to get larger, the district will work to maintain an intimate school climate where kids don’t get lost and teachers are given the resources to implement the most effective instructional strategies and every adult who works with kids continues to maintain an attitude of caring.”