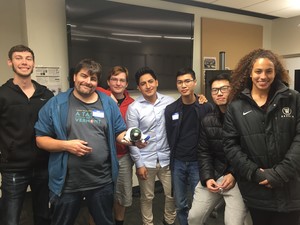 Seven students from WCSU defeated teams from Sacred Heart and Fairfield universities to defend their title and take home this year’s trophy, a mole stuffed animal that will be housed at WCSU until next year’s competition. This is a trivia-style competition that covers topics from all chemistry disciplines.

WCSU’s winning team consisted of Alex Matteson, of Brookfield; Xavier Arevalo and Tim Meksvanh, both of Danbury; Jasmine Grey and Steven Hong, both of Naugatuck; Max Simpson, of New Fairfield; and Michael Kelly, of Stamford.

Associate Professor of Bio-Organic Chemistry Dr. Nicholas J. Greco has been the group’s adviser since 2010. Greco believes that students do not need to attend an expensive, private university to excel academically.

“The education that one obtains at a state school in chemistry is on par if not better than at a private university, and if you compare education versus the cost, the price tag is dramatically lower,” he said. “It signifies that we are doing what we are supposed to be doing and the students are very well prepared.”

Each student responded to a series of questions, all of which ranged in difficulty from a 100-level class to a 400-level class. The group was a mix of underclassmen and upperclassmen.

Greco also believes that the faculty in the smaller chemistry department helps to create a strong connection with students. “We treat it very much like a family,” he said. “We are close-knit, know them on an academic and personal level and so there are a lot of discussions taking place that allow them to learn the information, prepare well and then represent very well, which this shows. It shows that tight-knit and family connection.”

Founded in 1876 and chartered by the U.S. Congress, the ACS is the world’s largest scientific society with members in industry, academia, and government. The nonprofit organization works with government to promote public policies that help the chemistry enterprise and its practitioners serve the nation.

ACS addresses national and global challenges such as economic opportunity, energy and water availability and environmental sustainability through chemical science and engineering.