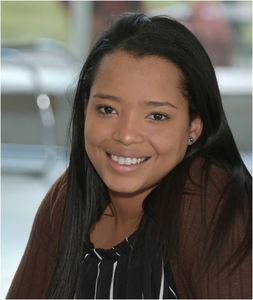 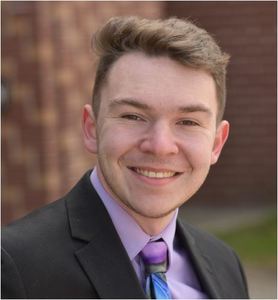 Ramirez is a Biochemistry major with a biology minor who will graduate in May with a Bachelor of Arts in Chemistry, ACS Approved. She plans to pursue a DDM in dentistry and research next fall, and will spend this summer volunteering in a dental office in Cuba. Namer has dual majors in Psychology and Political Science with a minor in Conflict Resolution, and will receive Bachelor of Arts degrees in both Psychology and Political Science next month. He plans to start his career in the fields of social work, homelessness, mental health and/or local or state politics, while considering his post-graduate degree options.

Namer and Ramirez are both graduates of Danbury High School and members of WCSU’s highly selective Kathwari Honors Program. Each is graduating with a GPA in excess of 3.9, and an impressive list of awards, accomplishments and scholarships.

Professor of Political Science and Director of the Kathwari Honors Program Dr. Chris Kukk was not surprised that two of his Honors students were chosen to receive Barnard Awards.

“Layra and Victor are the type of people who make whatever they are a part of better,” Kukk said. “They are not opposite sides of the same coin (some might say that because of their different backgrounds, but similar goals in helping others); to me, they make up the edge of the same coin because they are always at the leading edge of efforts to make our world a better place. It’s been a privilege to have a front row seat in watching two young scholars create their own paths in the world as they help make the path for others easier.”

Namer was born and raised in Danbury and took advantage of WCSU’s participation in the International Student Exchange Program to study abroad in Thailand and Spain — a decision that influenced both his personal spiritual journey and the action plan for his life.

“Each of these cultural exchanges played a key role in defining who I became,” Namer said. “Entering Thailand was the first time I was put into a position where I was forced to witness poverty, sickness and hunger on my daily walk to and from the university. Thailand enlightened me to the unseen suffering of those around me, and it was devastating. Spain taught me the value of putting my beliefs into action. I joined rallies protesting unfair practices imposed upon the people in local neighborhoods. I became educated in global politics for the first time in my life.   I began donating food and money to the local homeless population. Each of these two locations helped open my heart to live my values more fully, and I will always look back fondly on these experiences.”

Ramirez was born in Havana, Cuba, and emigrated with her family to Danbury as a junior in high school. Growing up in Havana, she saw the kind of suffering that her fellow Barnard Award recipient, Namer, discovered for the first time while studying abroad.

“I grew up seeing how the concepts of liberty and justice were twisted to the government’s convenience,” she said. “I saw how people were brutally repressed and even killed for speaking against the government. In my parents (who are chemists), I saw that regardless of how hard I studied or worked, I would still live in poverty. After high school, the Cuban government assigns students a career based on the country’s needs. As I got closer to graduation, I worried that the demand in dentistry would decline and I would never fulfill my dream of becoming a dentist. When my mother told me that we were going to the United States, it was the light at the end of my tunnel. I knew coming to a new country as a teenager was going to be challenging. However, it gave me the chance to follow my passion for dentistry.”

Once enrolled as Honors students at WCSU, Namer and Ramirez found ample opportunities to expand their knowledge and horizons — and more importantly, to help others.

Ramirez became involved in Minorities in Medicine, ultimately becoming treasurer and currently, president. She is the vice president and treasurer of the Collegiate Health Service Corps and serves as a Pre-Health Peer Mentor. She volunteers at local schools and nursing homes, and participates in events like Hunger and Homelessness Awareness Week and during volunteer days at the university’s Permaculture Garden. Ramirez has worked on a tick awareness program at summer camps, as a free Spanish language interpreter at the New Haven Free Clinic and in the Danbury schools, and as a provider of enrichment programs for Extended Learning Program 4th and 5th grade students in Danbury. As part of her studies, Ramirez has served as a research assistant in the Center for Disease Control-funded Backyard Integrated Tick Management Study conducted by WCSU’s Biological and Environmental Sciences Department. She has completed internships and observations with several area dentists, and attended the Yale School of Medicine Summer Medical and Dental Education Program. At the same time, Ramirez has been a teaching assistant for Biochemistry, Organic Chemistry and Biology courses at WCSU, while also maintaining a part-time job at a local grocery store. She also has returned to Danbury High School annually to encourage other immigrant students to pursue a college education and assist them with the application process.

Namer became involved in Honors Students of Compassion, ultimately becoming secretary, vice president and currently, president. He volunteers at the Community Warming Center, is the social action chair at his synagogue, is an Honors student representative to the WCSU Center for Compassion, Creativity and Innovation board, and a student ambassador for the International Student Exchange Program. He has served as a teaching assistant for Fundamentals of Conflict Resolution and The Nature of Inquiry courses taught at WCSU and is working with the dean of Student Life to develop training sessions on conflict resolution for campus residence halls. As a member of WCSU’s Hancock Student Leadership Program, Namer had the opportunity to shadow the deputy superintendent of the Danbury Public Schools for a leadership field experience. He also was a legislative intern in the Connecticut General Assembly for State Rep. Christopher Rosario, where he oversaw constituent casework, and he undertook an events and planning internship at CityCenter Danbury, which led to part-time employment as a project coordinator working to revitalize downtown Danbury.

As his five-year journey toward obtaining dual Bachelor’s degrees nears its conclusion, Namer is philosophical about his receipt of the Henry Barnard Distinguished Student Award. “It is both a pleasure and an honor to be selected as one of the CSCU Henry Barnard Distinguished Student Award recipients,” he said. “Looking back on everything, I could not have done it alone. They say it takes a village to raise a child, but it takes a strong community to raise leaders of tomorrow. I am grateful to faculty, staff, family, friends and my peers who helped me along my path to get to where I am today, and I am overjoyed to have received this award.”

Also reflective on her impending graduation and receipt of the Barnard Award, Ramirez said, “When I first walked through the doors of WCSU I thought that I didn’t belong here. I could barely speak English and I thought there was no place for me in a college. I thought professors wouldn’t have the patience to explain things again when I didn’t understand. I thought people would judge me for my accent and for being different. But that was never the case. I was celebrated for being different; I was loved and respected. So this award means that at WCSU we have a support system so strong that your background becomes secondary and the only thing you need to be successful is hard work and dedication. It means that yes, YOU can.”

Namer and Ramirez will accept their awards at an April 23 ceremony in Plantsville.