CityCenter Danbury calls all filmmakers to enter a shorts contest 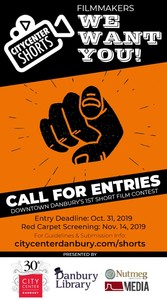 And the winner is …

Well, the winner won’t be known until November, and any filmmaker who wants to be considered for the first CityCenter Shorts film competition has about four months to put together a masterpiece set in CityCenter Danbury.

There are a few rules. The films must:

The deadline for submission is 11:59 p.m. on Oct. 31. The judging panel will include Patricia Clark, producer and president of The Nutmeg Institute; Renato Ghio, co-owner of RMedia in Danbury; Danbury Mayor Mark Boughton; Emanuela Palmares, editor of the Tribuna newspaper; and Darla Shaw, a retired professor of Education at Western Connecticut State University.

CityCenter Danbury and the Danbury Library are sponsors of the first-ever film contest.

“We want to bring attention to the merchants, history and potential of downtown Danbury,” said CityCenter chairwoman Alicia Ghio. “There’s plenty of creativity downtown and we are encouraging artists of all types to have fun and show off their talents.”

Aurelio Muraca of the Danbury Library Technology Center first suggested the idea of a film competition to Ghio, who talked over the project with her contacts in the film production industry.

A red carpet screening will take place on Nov. 14 at the Palace Theater on Main Street where the top three winners will be shown and three honorable mentions will be announced.

Filmmakers who are Connecticut residents with a library card can use the free video editing studio at the Danbury Library.

View the entire set of contest rules at http://www.citycenterdanbury.com/shorts.