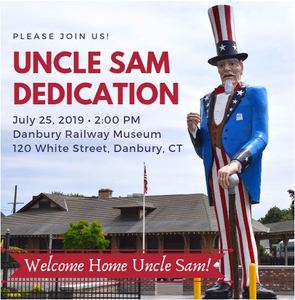 Mayor Mark Boughton is proud to announce that Uncle Sam has returned home, nearly 4 decades after the last Great Danbury State Fair. The 38-foot-tall statue now resides at the Danbury Railway Museum on White Street. To honor both his history and return to the City, we will be holding a dedication ceremony on Thursday, July 25 at 2:00pm at the Danbury Railway Museum (120 White Street).

When Mayor Boughton discovered that the Uncle Sam statue was for sale, he visited the Magic Forest Amusement Park in Lake George, NY to plead the case of Danbury’s history in order to make the deal. In October, he asked residents to donate to the purchase and rehabilitation of the Uncle Sam statue through a GoFundMe page. The donation page sparked interest in both current and former Danbury residents who recalled great memories at the Fair.

Community groups and local businesses also donated to the initiative both financially and through their time and labor. Our major contributors are listed on plaques that will remain at the base of the statue in order to honor their generosity. These donors include Union Savings Bank, FuelCell Energy, John & Patricia Rayner, Mariano Brothers, the Ecuadorian Civic Center of Greater Danbury, American Pavement Specialists, Jim’s Welding Service, The Rizzo Companies, Concrete Works, Joe Capasso Mason Enterprise, Connecticut Foundation Corporation, Robin Graphics, and Tilcon. We are especially grateful for the Danbury Public Works Department, led by Antonio Iadarola, who assisted in every step of the transport, rehabilitation and relocation process.

“The Uncle Sam statue is an iconic piece of Danbury’s history and we are proud to honor that,” said Mayor Boughton. “To see so many individuals and businesses go out of their way to show support for this initiative shows us how special this piece of history is to our community.”