Congratulations to Danbury Public Schools Teacher of the Year! 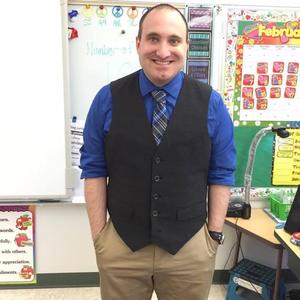 AIS math educator is DPS Teacher of the Year

Math doesn’t come easily for everyone, and Matthew Calvanese, a fourth-grade math teacher at the Academy of International Studies, knows it. That’s why he works hard to reach every student in his classroom, from the student who can’t sit still to the one who finds math just a pile of numbers.

“I focus on making relationships with the kids and I ask them what their interests are,” Calvanese said. “I try to find something I can connect to and we can bond over.”

For all of his efforts, Calvanese was named the district’s “Teacher of the Year 2019-20.”

“Matthew is the one of those teachers who brings out the best in our students by being approachable and making lessons practical,” said Superintendent Dr. Sal Pascarella. “He has an excellent rapport with students and works tirelessly to make sure that he engages each child, which isn’t always easy when there are 23 students in a classroom. His enthusiasm coupled with his knowledge of delivering curriculum is the key to student success.”

“I did my student-teaching in Danbury and I just really liked it,” Calvanese said. “I like the diversity of the district and that everyone gets brought together. It’s also important that kids get a good education regardless of their zip code and circumstances. The district offers a solid education. I like the magnet theme and focus. We talk about socially responsible global citizens. The world is wide open, and it’s an amazing thing to have that awareness that students here share.”

Despite the glory of his success, Calvanese said he still finds it challenging to meet the demands of more than 100 students every day.

“I always feel like there’s not enough time to help everyone,” he said. “I get them for just one year and I need to make the most of it.”

Calvanese said being chosen as Teacher of the Year is exciting, but he gives a nod to his colleagues for helping him along the way.

“It’s an honor, but it’s also an honor for our school,” Calvanese said. “The other teachers influenced me, and I have learned from them. It’s a celebration of all our hard work and dedication.”