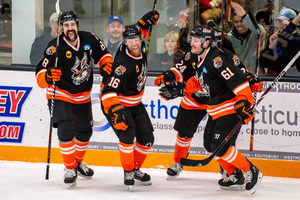 Though Adam Howey would strike first just 29 seconds into the contest on goaltender Tom McGuckin, the Hat Tricks would answer back with a goal of their own off the stick of Jonny Ruiz. Gordy Bonnel would give Danbury their first lead of the night, but a shorthanded goal would be buried by Toni Lampo of the Rumble Bees.

That would be as close as Battle Creek would come to victory in the game, as the Hat Tricks would rattle off eight unanswered goals over the course of the rest of the game. Phil Bronner and Nicola Levesque continued their red-hot scoring streak, Ruiz would tack on his second of the game as would Bonnel, Steve Mele found the back of the net for his second goal of the season, Vlad Gavrik would tally two of his own and Brett Menton would net his first with the team.

Fists would also fly multiple times throughout the game, with several bouts of fisticuffs igniting the arena.

The Hat Tricks will be on the road next week, visiting the Elmira Enforcers for a three-game set. They return home December 6th and 7th for a series with the Delaware Thunder. Tickets are on sale now at danburyhattricks.com/tickets. For more information, call the main office at 203-794-1704. Live game streaming available on Youtube.