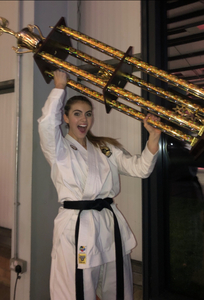 A lifetime Practitioner of Karate and Taekwondo, Gabrielle won first place for Poomse (forms) in the Korean Division. Then she went on to Dominate the traditional Karate Division for Japanese Kata in the Women's Black Belt Division.  She finished the event by winning the Overall Grand Champion.

Gabrielle is a full-time student at WCSU and works part-time at her parents' Karate School (Connecticut Martial Arts, 67 Newtown Rd. in Danbury).  She also trains competitors all over the world via skype.

Gabrielle has won several world championships this year and is ranked #1 in Traditional Karate in the U.S. NASKA (North American Sport Karate Association).