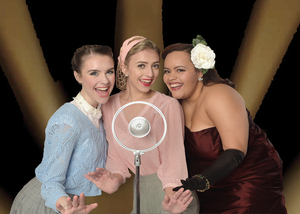 The Western Connecticut State University Department of Theatre Arts will present “The 1940’s Radio Hour” from Dec. 4 through 8 in the MainStage Theatre of the Visual and Performing Arts Center on the university’s Westside campus, 43 Lake Ave. Extension in Danbury. Preview performances will be at 8 p.m. on Wednesday, Dec. 4, and Thursday, Dec. 5. Public showings will be at 8 p.m. on Friday, Dec. 6, and Saturday, Dec. 7; with 2 p.m. matinees on Dec. 7 and Sunday, Dec. 8.

Based on a book by Walton Jones, “The 1940’s Radio Hour” evokes a different time. It centers on a live broadcast of “The Mutual Manhattan Variety Cavalcade” from the Hotel Astor’s Algonquin Room on Dec. 21, 1942. The spirit of that bygone era when the world was at war and pop music meant “Strike Up the Band” and “Boogie Woogie Bugle Boy” (both are in this show) is accurately captured with an interesting cast of characters. The show offers the opportunity to escape to a different time and become enthralled in this merry, joyous production.