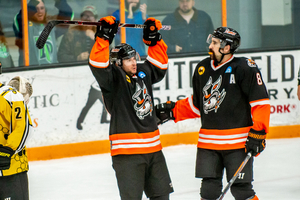 Shayne Morrissey opened the scoring just 2:56 into the opening frame, receiving a faceoff win from linemate Carter Shinkaruk and wiring a shot past Michal Marcinek. Minutes later, Shinkaruk would tally one of his own. Casper Dyrssen would bang home a rebound on the powerplay, extending the Hat Tricks' lead to 3-0. Just 25 seconds after the powerplay goal, Phil Bronner would spin a backhander home for Danbury's fourth goal.

A second goal from Shayne Morrissey chased Marcinek from the net, replaced by Morgan Hudson.

The second period was equally unkind to Hudson, as Kendall Bolen-Porter erupted for a hat trick- his first as a professional. Carter Shinkaruk would also tack on a goal in the frame.

Danbury would cruise to the finish line, skating away with a 9-2 victory.

Perhaps most impressive about the Hat Tricks' performance this weekend is their ability to keep scoring without some of their key contributors in the lineup. Gordy Bonnel and Steve Mele were both missing from the forward lines, while Aaron Atwell was held out from the blueline as he recovers from an undisclosed injury.

"We were just looking to improve on the Danbury game," said assistant coach John Krupinsky, assuming head coaching duties as Billy McCreary skated on defense. "[Bolen-Porter] had a great weekend, he was hitting everything that was standing up. That third goal he scored, that was an NHL move."

The Hat Tricks now turn their attention towards a marquee matchup with the Western Division-leading Carolina Thunderbirds next Thursday, Friday and Saturday at Danbury Arena. Friday is Auto Worker Appreciation Night and Youth Sports Night, while Saturday is Jamaican Vacation giveaway night.