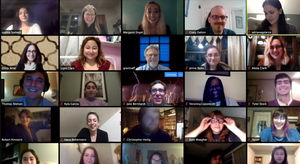 Sabrina Michael-Duncan of Danbury was among 20 Hofstra University students inducted into the Mu Kappa Chapter of Gamma Theta Upsilon (GTU), the international geographic honor society. The ceremony was held over Zoom.

The number of Mu Kappa members now stands at 158 since the chapter's founding in 2012. Hofstra's Mu Kappa chapter has been the recipient of a GTU Honors Chapter Award over the last five consecutive years.

Dr. Montz also spoke about the academic discipline of geography, which entails a diverse skillset that can be successfully applied to a wide range of topics, including the current COVID-19 situation. She congratulated Hofstra's initiates on their accomplishments and assured them that they are entering an honors organization with strong networking opportunities. She noted that two Hofstra Mu Kappa alumni, Jaclyn Catania '14 and Thomas Vogel '16, received graduate studies scholarships in her department after meeting her at the 2014 induction ceremony.

Hofstra University is a nationally ranked and recognized private university in Hempstead, N.Y. that is the only school to ever host three consecutive presidential debates (2008, 2012 and 2016). Our campus is a leafy oasis just a quick train ride away from New York City and all its cultural, recreational and professional opportunities. We offer small classes and personal attention, with the resources, technology and facilities of a large university. Students can choose from more than 165 undergraduate program options and 175 graduate program options in the liberal arts and sciences, education, health professions and human services, the Peter S. Kalikow School of Government, Public Policy and International Affairs, the Fred DeMatteis School of Engineering and Applied Science, the Frank G. Zarb School of Business, the Lawrence Herbert School of Communication, the Maurice A. Deane School of Law, the Hofstra Northwell School of Graduate Nursing and Physician Assistant Studies, and the Donald and Barbara Zucker School of Medicine at Hofstra/Northwell. Hofstra University is a dynamic community of 11,000 students from around the world who are dedicated to civic engagement, academic excellence and becoming leaders in their communities and their careers.