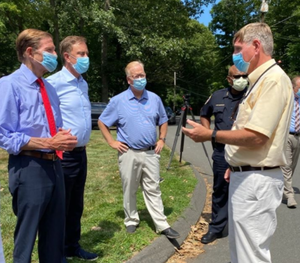 Update: at 12:30 pm today, Monday, August 10, Mayor Mark reported that half of the Glen Apartment complex now has power. The United Way is assisting with ice and water and Boehringer Ingleheim is supplying lunch and the New American Dream Foundation along with the Amber Room will be helping out with dinner. "THANK YOU ALL!" said Mayor Mark.

Mayor Mark Boughton is angry and fighting for the people of Danbury. The Mayor took to social media last night and said, "We have a serious situation developing at the Glen Apartments on Memorial Drive. Still no power. Many residents there are elderly and/or disabled."

Boughton says that thus far, Eversource has not responded to the City's pleas to restore service and there are no trucks on scene. He is not taking matters into his own hands. "We've moved HART buses in for cooling overnight, should there not be any results by midday tomorrow we will move all residents who want to a shelter - we will figure out a way to pay for their housing."

Boughton adds, "These situations around Danbury are now becoming life-threatening."