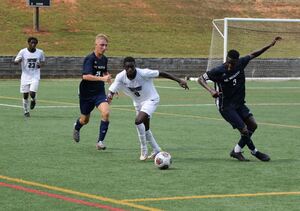 The Piedmont College men's soccer team took the field February 20 at Walker Athletic Complex in Demorest for the first time in its spring season, and the Lions used that familiar feel to springboard them to a 5-1 conference win over Berea for their first victory of 2020-21.

The Lions (1-2, 1-1 USA South) struggled to get the offense going in their first two contests but turned the corner as 22 shot attempts resulted in five goals for three different players.

Piedmont controlled the time of possession battle for much of the game but didn't manage to get on the board until the 39th minute, when freshman Evan Saylor of Dacula, Georgia, got a break on a long free kick.

From close to midfield, Saylor's volley into the box took a bounce and missed everyone, which surprised the Mountaineer goalkeeper Benjamin Rado. As Rado made a move to where he anticipated the ball going, it instead bounded past him the other direction for Saylor's first goal as a Lion.

Piedmont scored again five minutes later in the waning moments of the first half as freshman Ricardo Ruiz of Watkinsville, Georgia, also netted his first career goal on a pass from Lule Tekilemariam of Stone Mountain, Georgia. Ruiz wasted no time in getting goal number two as he and Matthew Loftin of Athens, Georgia, played give-and-go in the 48th minute, leading Ruiz to his second goal in less than five minutes of game time.

Berea answered with a goal of its own in the 58th minute as Max Jr. collected a loose ball at the top of the box and fired one past goalkeeper Cameron Verona of Locust Grove, Georgia.

The Mountaineer's first goal of the season was the only one allowed by Verona and the Lions defense on just eight shot attempts for the game. Verona made two saves in the strong defensive effort.

Piedmont finished out strong as Saylor joined Ruiz with two goals in the game after he connected on a penalty kick opportunity that was set up by sophomore Mala Jallow of Danbury, Connecticut, getting taken down in the box in the 72nd minute.

Jallow got another opportunity later on in the 84th minute and joined the party with his first goal of the season after a pass from Loftin sprung him loose down the left side. Jallow's goal put the finishing touches on a much-needed 5-1 victory that gets Piedmont into the win column for the first time this season.

Piedmont College's men's soccer team emerged victorious from a balanced game with Pfeiffer on February 21 for its second home victory in as many days.

The Lions (2-2 overall) struck first but had to score twice (plus an insurance goal) in the final period to earn a comeback win.

Senior Cameron Earls of Tifton, Georgia, returned to the lineup and made his presence felt right away as he scored the game's first goal on a diving header in the 18th minute. The goal was the first of the season for Earls and was set up by a perfect pass from Ruiz, who scored a pair of goals in the previous day's match.

Not long after, the Falcons caught a break when a long throw-in ricocheted off a couple of heads and bounded past Piedmont keeper Verona. The goal was credited to Caz Dabrowski but also appeared to hit off of a Piedmont defender last.

That goal changed the momentum totally in Pfeiffer's favor as Sam Stewart got one past Verona less than four minutes later to put the Falcons up 2-1 in the 30th minute.

Despite getting some good looks, the Lions couldn't score again and went into the halftime break trailing by one.

Not long into the second period, freshman forward Loftin evened the score as his free kick from straight away curled into the top left corner for his first collegiate goal in the 54th minute.

For the next 20 minutes, overtime looked like a real possibility, but a misplay from a Falcon defender led to an own goal as the attempt to play it back to keeper Johvany Herrera was off the mark. Pressure from Earls and sophomore Jallow led to the misplay and gave the Lions the lead with less than 10 minutes to play.

Piedmont made sure to add an insurance goal as freshman Matthew Franklin of Atlanta, Georgia, delivered his first goal after the rebound from Loftin's free kick bounced out to him. The fourth goal gave Piedmont the breathing room it needed to pack in on defense and finish out the non-conference victory.