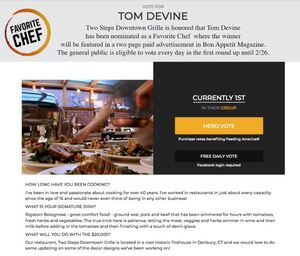 Two Steps Downtown Grille is honored that Tom Devine has been nominated to be featured in Bon Appetit Magazine as a Favorite Chef.

The general public is eligible to vote every day in the first round until 2/26. Please note: a Facebook account is needed to cast your vote.

Devine remarked, "It's awesome to be a local representative in this contest. We'd like to win to show that everyday food can be approachable and doesn't have to be complex to be delicious."

Devine says on his Favorite Chef profile page, "I’ve been in love and passionate about cooking for over 40 years. I've worked in restaurants in just about every capacity since the age of 16 and would never even think of being in any other business!"

Find out what Devine considers his "signature dish" and how he will spend his winnings of $20,000 by clicking HERE.

Tom Devine, along with his wife Susan, has owned and operated restaurants in Danbury for over 30 years.  Currently at Two Steps Downtown Grille and formerly at Ciao! Cafe and Wine Bar. Tom has been a fixture on the Danbury dining scene and actively involved in the downtown revitalization.

About Favorite Chef:
Chefs from around the globe are invited to compete in an exclusive online competition to be named the worlds Favorite Chef 2021, receive $20,000 and be featured in a sponsored double page spread in one of the largest cooking publications in the world. Celebrity Chef Eddie Matney is known for his colorful and innovative culinary skills. He is widely revered as one of the most dynamic, eccentric, and inspiring figures in the culinary world and has received acclaim in the largest cooking publications in the industry. Eddie is here to host the Favorite Chef Competition and provide cooking tips, encouragement, and insight that will lead one talented chef on the path to victory! The competition will be donating a portion of the proceeds to Feeding America®, the nation’s largest organization dedicated to fighting domestic hunger through a nationwide network of food banks. For more than 40 years, Feeding America has provided nourishing food to people who are facing food insecurity while actively working to end the cycle of poverty and hunger