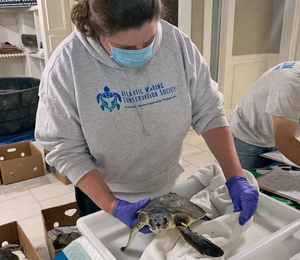 It’s never too late to pursue a graduate degree

While it tends to be customary that many individuals seeking a master’s degree enroll in a program as completion of their undergraduate degree is imminent, some choose to enter the workforce for several years before seeking a graduate degree to enhance their professional opportunities. Others excel at their careers for a decade — or several — before deciding to elevate their credentials with a master’s degree. Kimberly Durham is from the latter group.

Durham has worked with various nonprofit organizations to help preserve and promote the growth of the northeast sea turtle population since 1991. She is currently the New York State Sea Turtle Coordinator and the Necropsy Program Coordinator at the Atlantic Marine Conservation Society (AMSEAS) based in Westhampton Beach, New York. She has nearly 30 years of experience with rescuing, rehabilitating and reintroducing sea turtles back into their natural habitats. So, when a group of 20 cold stunned sea turtles were found off the coast of Cape Cod this past December, Durham and her team were called in to help.

Because sea turtles don’t migrate, they are susceptible to a natural phenomenon called “cold-stunning,” where if the turtles spend a prolonged amount of time in cold water, they become weak and inactive. If the turtles are cold stunned for too long, they risk drowning. Given the northeast climate, this is a particularly large issue in the waters off the coasts of New York and Massachusetts.

Typically, a team based in Cape Cod would have been there to rescue and rehabilitate the cold-stunned sea turtles and reintroduce them to the ocean when they had recovered. However, because of the COVID-19 pandemic, typical responders weren’t available in Cape Cod, and those who were onsite were unable to provide the necessary care for these turtles.

As a result, the turtles were flown from Cape Cod to Westhampton Beach by volunteers from Turtles Fly Too, a nonprofit organization. AMSEAS team members received the turtles at Gabreski Airport.

Once they received the turtles, Durham and her team were able to begin the rehabilitation process at the AMSEAS facilities. There, turtles are rehabilitated through various techniques such as daily feeding and the monitoring of their water temperature in order to get their internal temperatures back up to a normal level. On the rehabilitation process, Durham said, “We use clinical treatments, provide husbandry, and really just do whatever else we can to help these turtles make a recovery and work toward a release.”

Together with her team, Durham and volunteers, which she said are essential to the success of the rehabilitation process, were able to rehabilitate these turtles over the course of a few months before they were eventually flown down to Cape Canaveral, Florida.

With the help Turtles Fly Too, 11 of the turtles rehabilitated by AMSEAS were picked up at Gabreski Airport in Westhampton and flown down to the Cape Canaveral National Seashore. The National Park Service along with NASA representatives then transported the turtles to Playalinda Beach. On Friday, Feb. 26, the 11 turtles were successfully released back into the wild alongside 24 others. AMSEAS presently has four turtles still receiving care in the triage facility.

This most recent rescue is just one of many instances where Durham and her team have been able to save and rehabilitate sea turtles before releasing them back into the wild. “When dealing with an endangered species, it’s special because everything counts,” Durham said. “Each release helps a little bit.”

Not every rescue is a success, though. Durham has also seen a lot of mortalities during her time working with sea turtles, and she wants to tell their stories to shed light on this issue and bring it to the public’s attention.

“We’re seeing a lot of mortalities, too,” Durham said. “We see vessel strikes, for example, where a turtle is hit by a boat. What happened to them? What can be done to stop this from happening again? We need to be telling the stories of these mortalities and increase awareness on what is going on in these waters.”

Through her work with AMSEAS, Durham was able to collaborate with people who pointed her in the direction of Western Connecticut State University’s M.S. in Integrated Biological Diversity program. She soon realized that the M.S. in Biology from WCSU would provide her with the tools and platform that she needed to effectively tell these turtles’ stories and get them to the public.

Durham is currently enrolled in the program, which she says attracted her for several reasons. “For me, it was really the curriculum and the teachers that drew me to the program. The WCSU M.S. in Integrated Biological Diversity gives me the tools I need to get the stories of these turtles out to the public. I can organize and package my research to put forth in a variety of mediums.”

As the New York Sea Turtle Coordinator and the Necropsy Program Coordinator at AMSEAS, Durham already has a job that she loves. Every day, she gets to make a meaningful difference by aiding in the survival of endangered species. What’s equally important though, according to Durham, is to spread the awareness that these things are happening in the first place. The resources offered to her by the WCSU M.S. in Integrated Biological Diversity program have allowed her to work toward this goal.

“I want to tell their stories and get that information out to the public and legislators,” she said. “I want to make people care in a way that will make a difference for these turtles.”

For more information, contact Dr. Dora Pinou at This email address is being protected from spambots. You need JavaScript enabled to view it. .