Submit your nominees for the 2021 Cecil J. Previdi Award! 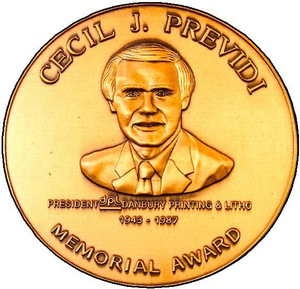 Submit your nominees for the 2021 Cecil J. Previdi Award!
(Save the date: December 10, 2021 for the Previdi Award & State of the City Luncheon)

The Cecil J Previdi Award Nomination Form Honors the late Cecil J Previdi the former President of Danbury Printing & Litho later known as Banta. Through his leadership and guidance, he restructured the family business, relocated to a new facility on the west side of Danbury and grew the business to a 20-million-dollar organization. Tragically in 1987 Cecil Previdi along with 5 others from the company were killed in a plane crash in Wisconsin.

Individuals nominated for this award are limited to those Entrepreneurs from the Greater Danbury Business Community who embody the spirit of Cecil J Previdi, and who have demonstrated a progressive business attitude, leadership abilities, vision, and who have contributed to the growth of a local business. To nominate an individual, click here, fill out the form and return it to the Great Danbury Chamber of Commerce no later than August 20, 2021.