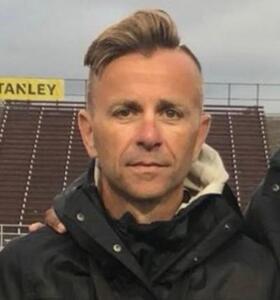 Rob Murray, coach of the Danbury High School boys’ cross-country team and running coach for 21 years, earned a national title last week for his success and dedication in consistently taking the Hatters to state and regional championships.

Murray was named the “2021 National Boys’ Cross Country Coach of the Year” at the National Coaches Convention of the National High School Athletic Coaches Association (NHSACA) on July 29 in Lincoln, Nebraska. He was initially one of eight coaches nominated for the title from across the country. The title was based on criteria that included win/loss record, championship years and tenure as head coach.

“Rob’s leadership and coaching have been essential to our student-athletes, especially during a very tough year,” said Interim Superintendent Kevin Walston. “Rob’s positivity, enthusiasm, patience and focus have helped his students not just succeed in their sport but have provided them with the tools to move forward confidently in all endeavors.”

Murray’s long track record of accomplishments includes being named cross-country Coach of the Year by the Connecticut High School Coaches Association in 2008 and by the U.S. Track & Field and Cross-Country Coaches Association in 2014. In 2017, he was inducted into the Fairfield County Interscholastic Athletic Conference (FCIAC) Hall of Fame; he has held the title of FCIAC Coach of the Year 13 times.