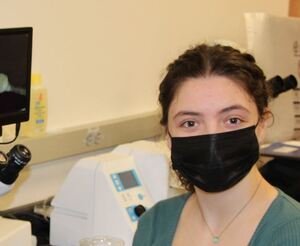 Two Eastern Connecticut State University biology students presented research to the American Society of Plant Biologists (ASPB) during its 2021 Virtual Worldwide Summit held July 19-23. Among the presenters was Catrina Sullivan of Danbury, a senior who majors in Biology.

Sullivan's research focused on the "Characterization of 'Medicago truncatula' Plant Mutants Defective in Symbiotic Nitrogen Fixation." This project has been in the works since January 2020. COVID-19 put the research on hold, but Sullivan was able to pick back up in the spring 2021 semester.

"My research involves obtaining mutant lines of Medicago truncatula, which have random Tnt1 insertion mutations. The mutations occur in random genes, and if the mutant line is not able to perform SNF, that indicates the gene with the mutation is vital to the SNF process. If the genes which are responsible for SNF can be isolated, then other plants can potentially be genetically modified to include those genes. This would effectively eliminate or decrease the need for synthetic nitrogen fertilizers, which will reduce costs for farmers and decrease pollution."