Danbury Superintendent Kevin Walston looks forward to growth and improvement "I want to be part of success!" 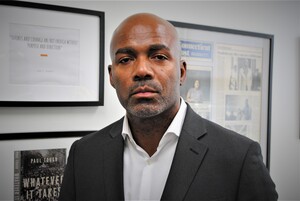 When Danbury Superintendent Kevin Walston graduated from high school in the late 1980s, he dreamed of making it big on Wall Street. So, he enrolled in a business program at the City University of New York to study finance.

“Wealth and status were the only measures I had that characterized success,” said Walston, who signed a three-year contract to lead the district in August.

That first college semester, however, didn’t go as planned: “I hated all of it,” he said.

Rather than continue beyond his first dismal semester, Walston traded the school books for a mop and worked for the New York City school district as a custodian, cleaning the floors of his former high school. It was this job that not only humbled him, but also opened his eyes to the idea that helping others was perhaps a better mark of success for him than living a life of luxury.

Walston said the teachers he saw day in and day out began to inspire him, as did the hardworking custodians he worked with side by side, often young men working to support their families. He began to develop a better understanding of what responsibility meant and how having a positive effect on others is crucial to personal development. It began to dawn on him that there was a purpose in going to school, in teaching others, in reaching for dreams that went far beyond the dollars in a bank account.

At the end of every school day at Lehman High School in the Bronx, Walston cleaned the floor of Bob McDermott’s classroom. The work day always ended with the two of them spending an hour talking.

“I put my broom down. He put his pen down, and he talked to me. An hour every day,” Walston recalled. “Mr. McDermott told me that it was rewarding to have a new group of students every year to shape and mold. And he was doing the same thing for me.”

For every conversation with the social studies teacher, Walston inched a bit closer toward figuring out his own life until he one day decided that he too wanted to be a social studies teacher. The deal was cinched the day the school’s principal Robert Leder approached Walston and said “You’re going to teach at my school. Go finish and graduate and I’ll hire you.”

Walston taught at Lehman High School as a special education social studies teacher for five years before being promoted to Dean. He went on to become assistant principal at Kennedy High School in the Bronx and then assistant principal in Norwalk, Connecticut. His first position as a school principal was in Bridgeport, then Waterbury, followed by New Jersey. He was first hired by DPS as assistant superintendent in 2018.

Walston still says that his favorite position is as principal because of the daily interaction with students, staff and families.

“I used to say the cafeteria was my classroom,” said Walston who went to many of the school’s games and knew all of the student-athletes and watched the many celebrations of student accomplishments.

“Having a connection to those kids and forging relationships with parents are very rewarding,” he said. “One of the reasons I’m attracted to the position superintendent is that it’s an opportunity to continue that interaction. Even though I’m further from students, I’m hoping to interact more with teachers, principals and families.”

The role of superintendent of a district with 12,000 students, 19 schools and a stretched budget is one of enormous challenges. Walston said that he plans to take a step back before moving forward to observe how the district operates and where he can make the biggest difference in terms of student success.

“It’s everything,” Walston said of his new position. “The trouble is always going to find you. That’s ok – it’s part of the job.”

His main priority is to oversee and manage all of the district’s many departments and ensure the health, safety, and social and emotional wellbeing of the district, and to develop and maintain a healthy budget.

Because he worked in Bridgeport and Waterbury, school districts with larger enrollments than Danbury that also face numerous challenges, Walston is prepared for what lies ahead in terms of the rapid growth anticipated in Danbury schools.

“I’m excited to be here because this staff is amazing,” Walston said. “Especially during the pandemic, we went over and above. I’m not aware of any district that had principals and staff knocking on doors to make sure students were engaged in online learning and families had what they needed. I had seen during this incredibly challenging time that we had the foundation for something really special.”

Despite its successes, Walston said, Danbury will continue to improve and he looks forward to projects such as the building of the new career academy high school. He said it’s remarkable that in recent years the district has twice named six and seven schools of distinction for closing achievement gaps despite budget woes. The district has also had two National Blue Ribbon Schools to add to its list of accomplishments.

Walston see this recognition as attestation of the commitment of faculty and staff to a student population that increases at an unprecedented rate while bringing with it a multitude of challenges that come from a diverse population. The district had worked to make sure that students who are challenged linguistically or come from families that are struggling are able to overcome their deficiencies. For Walston those distinctions mean only one thing: that he is privileged to lead faculty and staff that put student success above all else.

“How could I not be excited about building on those successes?” he asked. “I had a good understanding of what was happening in this school district when I was embraced and welcomed when I got here. In the short time I’ve been working here I’ve also felt that we are a community with city partners and a wonderful Board of Education that is very supportive of the work we do.”

While Walston has a vision for the district, he hopes to learn as much as he can from teachers, staff and administrators about “how we can get better as a community”? He hopes to expand his conversation to the students, the parents and the community.

“There will be no significant changes in the first year, but it’s important to make sure I’m listening and learning in my new tenure as Superintendent,” he said.

Part of his plan includes professional development for the Board of Education and the cabinet, followed by administrators, teacher leadership and community members. He also wants to frame a strategic plan that will represent how the district will move forward in the next three to five years.

“I’m excited to see how much this district will grow and how we will respond to that growth,” Walston said. “There are many success stories coming out of our schools, and I want to be a part of that success to whatever end I can be.”