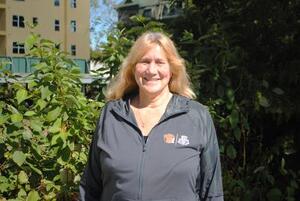 After leading the Hatters for more than 30 seasons and reaching 500 career wins last winter, Danbury High School girls’ basketball coach Jackie DiNardo has once again been recognized -- this time as the St. Clare Award winner by the Franciscan Life Center in Meriden.

DiNardo received her award Monday, Oct. 18, at the 35th Annual Franciscan Sports Banquet and Silent Auction at the Aqua Turf along with retired New York Giants quarterback Eli Manning, recipient of the 2020 St. Francis Award. The award was given in 2020, but the banquet was postponed until now because of Covid restrictions.

“Jackie is very deserving of the St. Clare Award,” said DHS Director of Athletics Chip Salvestrini. “This award represents giving back and helping others, and these are things Jackie has done all her life. Jackie’s goal, as a coach and as an administrator, is to give young people avenues to make the right choices in their lives. Jackie has an unrelenting work ethic with a heart to match. This award is a wonderful acknowledgment of her work throughout her career.”

DiNardo’s long career of accomplishments includes being named a National High School Coaches Association finalist. She led the Hatters when they won the FCIAC Tournament Championship in 2011-12, 2012-13 and 2013-14, becoming one of three teams to win a triple championship. In 2015, DiNardo was inducted into the Fairfield County Interscholastic Athletic Conference Hall of Fame.

The administrator of the district’s REACH and Endeavor programs, an alternative program for at-risk students, DiNardo played basketball at the University of Texas and earned recognition as an All-American player. She also played for the U.S. on the Pan Am Team for Pat Summitt where the team won three gold medals and one silver. In 2005, DiNardo was inducted into the Texas Hall of Fame and into the Connecticut Basketball Hall of Fame in 2012