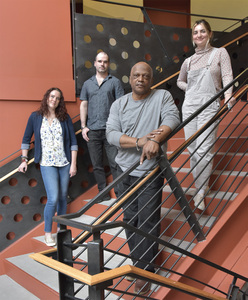 An opening reception co-sponsored by the Department of Art and the WCSU Alumni Association will be held on Thursday, March 24, from 6 to 8 p.m. The reception and exhibition are free and open to the public. The Gallery exhibition will be open for viewing from noon to 4 p.m. Tuesday through Friday, and on Saturday and Sunday from 1 to 4 p.m.

The M.F.A. Thesis Exhibition is the summation of two years of intensive, creative study and extensive interaction with resident faculty and visiting artists. The graduate student art also will be displayed at Blue Mountain Gallery, 547 West 27 Street, New York, New York, on June 21-July 9. This exhibition is supported by the Jason and Ellen Hancock Student Endowment Fund at Western Connecticut State University,

The Master of Fine Arts in Visual Arts is the preferred degree for the practicing artist who is preparing for a professional career in the visual arts. M.F.A. degrees are available in painting, illustration and interdisciplinary visual art. The M.F.A. Thesis Exhibition is the capstone experience of the graduate program, demonstrating a personal direction and mastery in the work of the artists. Four graduate students will present their thesis work this year:

Janelle Chandler is an illustrator based in New Haven County. In 2019, she earned a Bachelor of Arts in Illustration from Western Connecticut State University, where she is currently pursuing her M.F.A. in Visual Arts, Illustration. She is also enrolled in the Society of Botanical Artists Distance Diploma Program, United Kingdom. Inspired by the beauty of nature and botanicals, Chandler translates her subjects onto paper, working primarily with colored pencils and watercolor. In her artist statement, she writes, “In nature, we have the opportunity to experience any color imaginable, and there is never a shortage of shapes, textures, compositions and even mathematical formulas.” Chandler is a member of several artist organizations, including American Woman Artists, American Botanical Society of Artists and Colored Pencil Society of America. In 2020, her work was selected for an international juried exhibition at the Derwent Pencil Museum in Keswick, England.

Kelsey Gilmore is from Northport, New York, and currently resides in Bethel. Her artistic

practice includes paintings, works on paper and prints. She received her B.B.A. in Marketing from Iona College in 2017 and worked in management for a design company and product development with a shoe designer. Gilmore is now pursuing her M.F.A. in Visual Arts, Painting, at WCSU. Working from observation and memory, she explores the convergence of figuration and abstraction while hinting at themes of nature. Her paintings encompass a wide range in scale, from 8 x 10 inches to 6 x 8 feet. In her artist statement, Gilmore writes, “I am interested in the connection that exists between myself, nature and the unknown essence from which we both came from; the tiny miraculous moments that happen while present in everyday life. My work reflects the awareness that is mirrored within us through light, shapes and shadows existing in the natural world. There is a collaboration between myself and the material, a growing relationship that ebbs and flows until we both become one.”

Don Houston grew up in Tampa, Florida, and has lived in New Haven county since 2011. He attended a summer program at Ringling School of Art and received his Bachelor of Science degree from SUNY Maritime College in 2009. For two years, he worked on ships, one doing runs from Houston to Los Angeles through the Panama Canal, the other from the Far East to the Middle East. While working on the ships, Houston was greatly influenced by the isolation and indifference of the ocean. After moving to Connecticut, he re-discovered his love of painting and attended classes at Parsons School of Design. Houston is now pursuing his M.F.A. in Visual Arts, Painting, at WCSU. He writes in his artist statement, “The act of painting for me is a voyage. I don’t always know where it will take me, and navigating from blank canvas to completed work can be a stormy, emotional journey. I have some basic outline, some goal I want to achieve in the painting; as long as I am playing with light and color, the canvas can get as deep as the oceans I often paint.”

Robert Charles Hudson is a resident of Bristol, pursuing his M.F.A. in Visual Arts, Painting, at WCSU. He received his Bachelor of Fine Arts in Sculpture from the University of Connecticut and draws inspiration from his African American heritage and family traditions in quilting. His thesis work includes a series of paintings entitled “Bowtie,” which refers to a symbol used by slaves on their quest for freedom. In his artist statement, Hudson explains, “When slaves headed North…they would look for symbols on quilts to show them the way. The bowtie symbol indicated the necessity to travel in disguise, to change into clothes worn by a person of higher status to continue their escape on the Underground Railroad.” Furthermore, he writes, “I added a contemporary twist of color to the symbol of the bowtie. In my opinion, this employs a relief to such a horrific period in American History.” Hudson has exhibited in solo and group shows in Connecticut, Massachusetts, New York and Washington, D.C. His Connecticut solo shows include the Hartford Public Library, Mattatuck Museum and the New Britain Museum of American Art, where his work is in its permanent collection.

For more information, contact the Department of Art at (203) 837-8403 or the Office of Public Relations at This email address is being protected from spambots. You need JavaScript enabled to view it. .