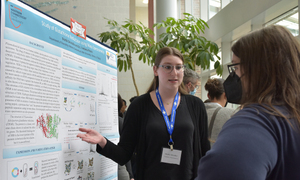 Western Connecticut State University announced the award winners of the 2022 Western Research Days (WRD), an event where 46 students officially presented their research, scholarship and creative inquiry to the university community.

All submissions had the endorsement of a faculty mentor, and WRD committee evaluated submissions based on the criteria for abstract content and assessed overall merit within the context of the specific academic discipline.

John Arnett of Bastrop, Texas, for “Effects of Urbanized Roadways on Northern Diamondback Terrapins”; Juliet Barbieri, of Brookfield, for “Building the Perineuronal Net: Assessing the Role of Aggrecan in Molecular Assembly”; Thomas Hilling, of Danbury, for “Microplastics and Aspergillus Fumigatus in Common Loons Collected and Sampled in New England”; Kristina Korin, of Bethel, for “Relating Food Addiction to Substance Abuse: A Review of the Literature”; Margaret Madsen, of Stamford, for “Constructing a Library of 2-Substituted Tetrahydrothiophenes”; Alysha Olson, of Bethel, for “The Patriot Game: Women in the Irish Republican Army”; Victoria Salerno, of New Fairfield, for “Human Trafficking: From the Court Cases in the United States”; and Brielle Skrutskie, of Chester, New York, for “Study of Glutathione Reductase Using Mass Spectrometry.”

Winners for oral presentations were Gabrielle Johnson, of Windsor, for “The Effect of Racism on Critical Consciousness” and Erica Griggs, of Hamden, for “An Evaluation of Blood Heat Shock Proteins as Biomarkers of Stress in Common Loons.”

Sigma Xi Student Research Awards also were presented to Barbieri and Skrutskie, as well as to Sophia Chiaia, of Bethel.

Karen Keeler, of New Fairfield, received the Library Research Award for demonstrating outstanding accomplishments in the use and application of library resources and services.

Keynote speakers for the event included Dr. Yanerys Leon and AmberJean Hansen, M.P.H. Leon is a research assistant professor in the Department of Psychology of the University of Miami (ABA Master’s Program), co-director of the Intensive Behavior Intervention Services (IBIS) Clinic, and director of Applied Research and Behavioral Training at the University of Miami-Nova Southeastern University Center for Autism & Related Disabilities.

Hansen graduated from WCSU in 2013 with a B.A. in Biology and a minor in chemistry. She received a Master’s in Public Health from the University of New England in 2016, and is a research assistant at the Connecticut Emerging Infections Program at the Yale School of Public Health.