Mystic pulls ahead in the eighth and prevails against Danbury 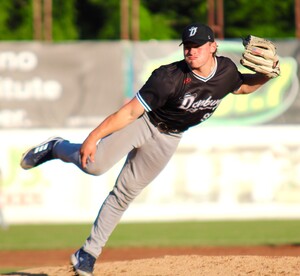 In a back-and-forth affair, Mystic pushed two runs across in the eighth to complete a 5-3 victory

The Westerners (5-5) suffered their third straight loss, and the Schooners (5-2) completed the season sweep of Danbury with the win.

Westerners’ shortstop Nicholas Romano went 2-3 with two singles and a walk, making it his second straight multi-hit game and his fifth straight game with a hit. During his five-game hitting streak, Romano is hitting .389 with a home run and three runs scored.

In the top of the second, Danbury plated the first run of the game on a barrage of hits from the middle of their lineup. Westerners’ left fielder Harrison Feinberg led off the inning with a walk, and the next two batters would rope base hits to load the bases. Colby Canales would follow with an RBI single to left to give his ballclub the early lead, but that would be the lone run of the inning.

Danbury’s lead would not last long because Mystic evened the score in the bottom half of the frame. After a leadoff walk from Schooners’ designated hitter Jimmy Chatfield, Anthony Donofrio scorched a single through the left side to tie the game at 1.

The third inning was scoreless for both sides, but Mystic would jump out to a 2-1 lead in the bottom of the fourth. First basemen Eddie Micheletti would start the frame with a double, and he would trot home on an RBI three-bagger from Donofrio. Westerners’ center fielder Jett Lovett made a great bid for the ball, but Donofrio’s clutch triple landed just out of his reach and rolled to the left-center field wall.

In the top of the sixth, Danbury would bounce back and scratch across a run to tie the game. Hank Thomas would walk with one down, and after a Nicholas Romano infield single, he would come around to score on a failed pickoff move from Schooners’ relief pitcher Logan Koester. Koester tried to pick off Romano at first, but the throw zipped past the first basemen and allowed Thomas to score from third easily.

Mystic would take a 3-2 lead in the seventh, but Danbury would tie it up again in the eighth with the help of the top of their order. Westerners’ centerfielder Jett Lovett started things up by lacing a double into right field, and third basemen Sam Mongelli followed with a base knock of his own. With runners on the corners and nobody out, Hank Thomas launched a sacrifice fly into deep center field that drove in Lovett and knotted the game up at 3.

Despite Thomas’ clutch situational hitting, Mystic would get the last laugh in the bottom half of the inning. With two outs and a runner on second, Eddie Micheletti tattooed a triple into right field to give his team a one-run lead. Later in the inning, the Schooners’ first basemen would score on a wild pitch to give his team a 5-3 lead, and they would win by that final score.

Schooners’ relief pitcher Connor Harris (1-1) earned the win in Friday night’s contest. Harris entered a 3-3 game in the eighth, and he slammed the door by retiring all five Westerners he faced.

Westerners’ relief pitcher Ryan Higgins (0-1) suffered the loss after surrendering the game's final two runs, and they were his first two runs given up all season.

Schooners’ starter Charlie McDaniel had a sterling performance Friday night. Outside a rocky second inning, McDaniel retired 12 of the 13 batters he faced. He went 5.0 innings, conceded a run on three hits, walked two, and struck out five.

The Westerners will return to Rogers Park on Saturday night and hope to end their three-game losing streak when they clash with the Winnipesaukee Muskrats. Cody Carwile will take the rubber for Danbury, and the first pitch will be thrown at 6:30 pm ET.