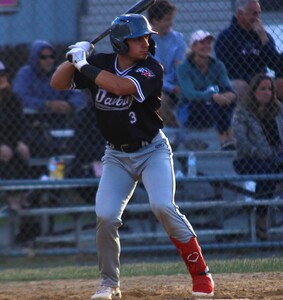 Valley stormed back from a two-run deficit in the ninth and stole a win from Danbury in ten innings.

Danbury (6-6) falls to 0-2 against the Blue Sox this season, and Valley (6-6) jumps to second place in the West Division.

Blue Sox right fielder Sam Franco went 2-4 with two singles and a run scored, and catcher Danny Melnick went 1-3 with a run scored. Blue Sox first baseman Charlie Ludwick went 1-5 at the plate, but his lone hit was a walk-off single in the bottom of the tenth.

Westerners’ first baseman Hank Thomas went 2-5 at the plate with a double and an RBI single. Joey Skarad went 2-3 with two singles and a run scored, and third baseman Nicholas Romano also had a 2-5 day at the plate. Romano’s multi-hit game extended his impressive hitting streak to seven games.

After six innings of scoreless baseball, the Westerners drew first blood in the top of the seventh. Joey Skarad kicked things off with a one-out single into right, and Nicholas Romano yanked a base hit past the diving second baseman to put runners on the corners with two outs. Westerners’ designated hitter Billy Gerlott loaded the bases with a hit by pitch, and Hank Thomas made it a 1-0 ballgame by shooting an RBI single into left field.

Danbury would tack on another run in the eighth thanks to right fielder Jake Hyde. Hyde roped a leadoff single into right, and shortstop Danniel Rivera moved him over to second with a sacrifice bunt. After another hit batsman, Hyde would trot home on a wild pitch to give his ballclub a two-run lead.

The Westerners carried this 2-0 advantage into the bottom of the ninth, but a wild turn of events allowed the Blue Sox to knot the game up at 2. After a leadoff walk and two flyball outs, Valley was down to their final out, but Sam Franco smashed a line drive into center that got past the center fielder. Melnick scored easily because the ball rolled to the warning track, and when the Westerners tried to nail Franco at third, the throw from the cutoff man sailed into the dugout. Franco was granted home plate because of the overthrow, causing the game to be tied in the blink of an eye.

Valley’s miraculous comeback forced the game into extras, putting the California Tiebreaker into effect. In the top of the tenth, Danbury failed to drive their ghost runner in from second, but Valley wasted no time in the bottom half of the inning. Charlie Ludwick led off the inning by smoking a ball to first, but it hit the first baseman’s glove, trickled into shallow right field, and allowed the ghost runner to score and give the Blue Sox their second walk-off win of the season.

Blue Sox relief pitcher Connor Bailey (1-1) earned the win for his ballclub. He went three innings, surrendered one run on two hits, and walked one batter. Renn Lints (2-2) suffered the loss for the Westerners by conceding the final run of the ballgame.

Jack Bowery and Braden Quinn did an excellent job out of the Westerners’ bullpen. Bowery’s two shutout innings put him at thirteen scoreless innings to start the season, and Quinn struck out six batters in four innings of work. The two ninth-inning runs that Quinn surrendered were unearned.

The Westerners will rest on Monday and start a stretch of eight games in eight days by welcoming the North Adams Steeplecats to Rogers Park on Tuesday night. Kyle Roche (1-0, 0.90 ERA) will take the mound for the third time this season, and the first pitch will be thrown at 6:30 pm ET.