Korey Morton drives in all five runs in his Westerners’ debut 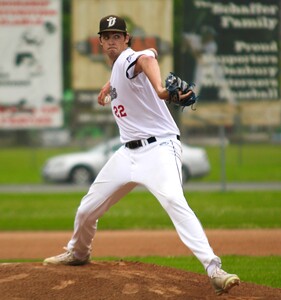 Morton went 3-4 with 5 RBIs on Tuesday night, and three of those RBIs came from a moonshot over the centerfield wall.

“It wasn’t trying to get too big tonight,” Morton said after the game. “It was great meeting new people, and I’m excited for the rest of the season.”

Steeplecats’ left fielder Alex Lane went 1-2 on the night, and centerfielder Hunter Pasqualini went 1-3 with a double and a walk.

The pitching staff has been the Westerners’ strength all season, and they dominated again by inducing many swings and misses from the Steeplecats’ lineup. In their last three games, Danbury has punched out 42 batters, surrendered four earned runs, and walked nine batters. They now lead the league with 142 strikeouts in 110.0 innings pitched.

“Our pitchers are doing a really good job of keeping hitters off-balance, and they’re consistently pounding the zone,” Coach Ratchford said after the win.

For the first three innings, it was the Jett Lovett and Korey Morton show on the offensive side of the ball. In the bottom of the first, Lovett jumpstarted the offense with a leadoff double down the left-field line. After moving over to third on a ground ball to the right side, Lovett trotted home on an RBI single from Korey Morton. Lovett would start it up again with a one-out walk in the third, and the Westerners’ right fielder advanced to third on a passed ball and a wild pitch. Two batters later, Morton drove Lovett in and gifted his team a two-run lead by legging out an infield single on the second-base side.

The game was still 2-0 when Westerners’ center fielder Jermaine White led off the bottom of the fifth with a single up the middle. Jett Lovett was granted another free pass to put runners on first and second with nobody out, and two batters later, Korey Morton launched a three-run bomb over the centerfield wall to give his team a comfortable 5-0 lead.

Morton’s five RBIs were the only runs the Westerners needed because Billy Oldham and Ethan Bradford sealed the deal with three combined shutout innings. Oldham fanned three of the six batters he retired in Westerners’ debut, and Bradford induced three weak groundballs in the ninth to secure the victory.

Kyle Roche (2-0) continued his dominant season with another sterling performance on the mound. Roche hurled six shutout innings, surrendered five hits, walked none, and punched out seven batters. The Franklin & Marshall product has only allowed an earned run and walked three batters in 16.0 innings of work this summer.

Steeplecats’ starter Cory Bosecker (0-2) worked his way into the fifth for the first time this season, but he only retired one batter in the frame. The southpaw suffered the loss after allowing five runs in 4.1 innings of work, and he surrendered six hits, walked three, and struck out seven.

The Westerners will try to build off this win when they return to McKenzie Field and battle the Valley Blue Sox on Wednesday night. Julian Tonghini (0-1) will be on the bump for Danbury, and the first pitch will be thrown at 6:35 pm ET.