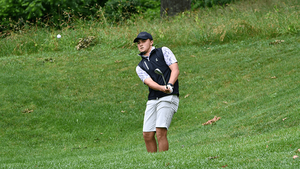 Danbury, Connecticut (June 22, 2022) – On Tuesday Jackson Roman earned the final spot in match play. Fast forward 24 hours later and he was the first player to punch his ticket into the quarterfinals at the 120th Connecticut Amateur hosted by Ridgewood Country Club.

Teeing off in the first match of the day at 7:30 a.m. Roman got the better of medalist Jack Woods (Ridgewood CC) 2&1 before handling Patrick Casey (Torrington CC) by the same tally in the afternoon. Leading 2 up with two holes remaining against Casey, Roman missed the green short on the 225 yard par-3 17th. Unable to see the flag the Loyola University Maryland sophomore lofted a gorgeous second shot to eight feet. Casey made sure to apply the pressure draining a 15-foot par putt but it didn’t faze Roman who rolled in his eight-foot par putt to close out the match.

Roman will meet Dan Gallo in the quarterfinals. Gallo (Mill River CC) started his day with a 3&2 win over Eric Bleile (EClub of Connecticut) before cruising past Austin Cilley (Lake of Isles) 5&3 in the Round of 16.

Murphy, just about a month removed from competing in the U.S. Amateur Four-Ball, started his day by defeating Two Man Championship teammate, Jamie Sheltman (Wallingford CC) 3&2. In the afternoon Murphy continued his fine play with a 4&3 victory over Joseph Ensign (TPC River Highlands). 1 up after 12 holes, Murphy won the next three holes to close out the match in emphatic fashion.

Dowling began a cold, damp, and rainy third day of the Connecticut Amateur with a 4&3 victory over 1991 winner Bill Hermanson (Black Hall Club) and then continued his run by besting Jackson Fretty (Greenwich CC) by the same margin.

Dowling and Fretty went back and forth early, however the two-time tournament winner, took control of the match with a birdie on No. 9 to take a 2 up lead and then pushed the lead to 3 up with a crucial up and down for par to win the par-4 14th.

“In match play, I take it one hole at a time,” said Dowling. “I treat each hole as if it is a new opportunity and then try to get in the flow and the zone.”

In a surprise, Jantzen Vargas (Quinnatisset CC) moved onto the quarterfinals with a 1 up win over two-seed Ben Day (New Haven CC) in the Round of 16. Neither player led by more than 1 up but once Vargas took the lead with a birdie on the par-5 15th he never relinquished the advantage.

Vargas will now take on the red hot Ben Carpenter (CC of Darien). On Wednesday Carpenter blitzed both of his opponents and only played 27 holes. A sophomore on the Yale golf team that won the Ivy League title, Carpenter defeated Jack Buccigross (Ellington Ridge CC) 7&6 in the Round of 32 and then in the afternoon he got the better of Jason Goshdigian (Goodwin Park GC) 5&4.

Ayers started the day with a 2 up win over Daniel Casanta (Ridgewood CC) and then in the afternoon scratched out a 1 up win against Anthony Guerrera (Watertown GC). Ayers was leading 1 up with two holes to play however after Guerrera won the par-3 17th Ayers needed a match winning par on the closing par-5 to advance.

Conroy, the 2018 champion, handled Mike Kennedy (Great River GC) 4&3 in the Round of 32 and then took down Matthew Chorches (Hartford GC) in the Round of 16. Conroy took the lead on the second hole in the afternoon and never gave up the advantage only losing two holes in the entire match.

The 120th Connecticut Amateur will continue on Thursday with the quarterfinals and semifinals before the 36-hole championship match is contested on Friday.

Photo: 32-seed Jackson Roman is through to the quarterfinals.