Vermont cruises past Danbury in a 3.5-hour marathon 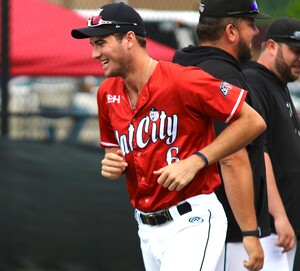 The Mountaineers’ offense drew twelve walks and tallied twelve hits in a 17-6 win over the Westerners.

Vermont (14-1) won their first game at Rogers Park since the 2017 season, and Danbury (7-7) fell for the third time on their home turf thus far.

Vermont’s lineup had four players that recorded multi-hit games. Mountaineers’ shortstop Joan Sosa went 2-3 with 2 RBIs, two runs scored, and one walk, and center fielder Evan Fox went 2-4 with two walks and three runs scored. Ben Williamson went 2-5 with 4 RBIs, and Keagan Calero was a key contributor from the bottom of the lineup by going 1-2 with 2 RBIs, a run scored, and three walks.

Westerners’ designated hitter Jake Hyde had a 2-4 night at the plate with an RBI double in the second, and catcher Joey Skarad finished the night going 1-3 with a walk and a two-run ground-rule double in the same inning. Nick Romano went 1-1 on the night with three walks and two runs scored.

The Mountaineers got the bats going by putting three runs on the scoreboard in the top of the second. After a leadoff single and stolen base from Evan Fox, Joan Sosa drove him in by ripping an RBI single up the middle. Three batters later, third basemen Ben Williamson laced an RBI single into right-center field to make it a 2-0 ballgame. As Williamson was stealing second, first basemen Keagan Calero watched the throw go all the way through to second base and darted home from third to plate the third and final run of the inning.

In the bottom half of the inning, Danbury would fight back with three runs of their own. With runners on the corners and one down, designated hitter Jake Hyde got his ballclub on the board by lofting an RBI double that dropped right in front of Fox. The ball took a crazy hop to his right, allowing Hyde to advance to second and Romano to coast into third. Joey Skarad followed suit by scorching a two-run double over the head of the left fielder. The ball bounced over the wall to make it a ground-rule double, and it knotted the game up at 3.

Despite Danbury's response on the offensive side of the ball, Vermont quickly rebounded and hung a six-spot in the third by sending ten hitters to the plate. With the bases loaded and nobody out, the first run of the inning scampered home on an error by the Westerners’ infield. After another run would trot home on a bases-loaded walk, Mountaineers’ right fielder Tom Ruscitti hammered a two-run double off the top of the wall in left-center field to give his team a 7-3 advantage. Keagan Calero roped an RBI single into right field to make it an 8-3 ballgame, and Vermont’s ninth run would cross home plate on a fielder’s choice.

Vermont tacked on another run to make it 10-3, but the Westerners made things interesting in the bottom of the eighth. Westerners’ left fielder Harrison Feinberg started the rally with a one-out single right back up the box, Hank Thomas walked, and Nick Romano dumped a single down the left-field line to load the bases. Feinberg would score easily on a wild pitch, and two more runs would come around to score on a throwing error from the Mountaineer infield. This turn of events made it 10-6, but Vermont retired the next batter to escape the jam.

Although Danbury clawed their way back again, Vermont put the game to bed with a seven-run ninth inning. The Mountaineers only had two hits in the frame, but they drew eight walks and had thirteen hitters step up to the plate. After this half-inning concluded, Mountaineers’ relief pitcher Jack Metzger pitched a scoreless bottom of the ninth to put his team in the win column.

Mountaineers’ relief pitcher Brendan McFall (4-0) earned his fourth win of the season, which leads the NECBL. In two shutout innings, McFall only allowed one runner on base via the walk, and he struck out three Westerners’ hitters.

Mountaineers’ starter Jack Cone retired the Westerners in order in the first, but his night would end after surrendering three runs in the second. His final line was 2.0 innings, three runs, two hits, three walks, and three strikeouts.

The Westerners will look to bounce back on Friday night when they travel to the Shark Tank and face off against the Martha’s Vineyard Sharks. The last time these teams met, the Westerners clinched their 2021 NECBL title birth by defeating the Sharks 7-5 in Game 3 of the best-of-three Semifinals. Aeden Finateri will get the nod for Danbury, and the first pitch is scheduled for 7:05 pm ET.