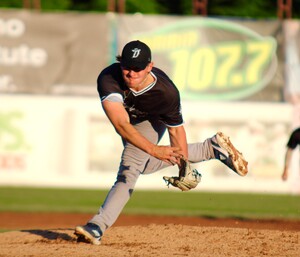 A three-run sixth and a strong outing from their bullpen helped Martha’s Vineyard power past Danbury 4-2.

Danbury (7-8) has dropped six of their last eight since starting the season 5-2, and Martha’s Vineyard (8-8) tied the Mystic Schooners for second place in the Coastal Division with the win.

Sharks’ shortstop Henry Wallen went 2-4 with a walk and an RBI, and first baseman Ryan Nicholson had a 2-4 night with a run scored. Logan Chambers also finished the night going 2-4 with two singles at the plate.

Westerners’ second baseman Jackson Taylor was the catalyst for his team’s offense on Friday night. Taylor went 2-3 with a double and scored both of Danbury’s runs, and left fielder Dayvin Johnson drove him in with an RBI single in the fifth.

In the top of the third, Danbury would strike first with some small ball. Jackson Taylor and Dayvin Johnson got plunked to start the frame, and center fielder Jett Lovett walked on four pitches to load the bases. Sam Mongelli would come up next and sky a ball deep into right field, allowing Taylor to score and give his team a 1-0 advantage.

Martha’s Vineyard would immediately answer in the bottom half of the inning. Sharks’ catcher Matthew Maloney jumpstarted his team’s offense with a leadoff walk, and after advancing to third on a base hit and a fielder’s choice, he would score on a wild pitch to even the score at 1.

Both starting pitchers tossed up zeros in the fourth, but Danbury jumped back in front in the fifth. Jackson Taylor ignited the offense again with a one-out two-bagger in the right-center gap, and Dayvin Johnson dumped an RBI single into left-center field to drive him in and make it a 2-1 ballgame.

The Westerners had an opportunity to extend their lead in the top of the sixth, but they stranded runners on the corners with one out by bouncing into an inning-ending double play. Martha’s Vineyard rode this momentum into the bottom half of the inning and stole the lead back from Danbury. Ryan Nicholson led off the inning with a double, and he scored on a two-out RBI single from Henry Wallen. Sharks’ left fielder Luke Masiuk blooped a single down the right-field line to put runners on the corners, and both runners would touch home plate on a line drive that could not be squeezed by the left fielder. Matthew Maloney hit a missile into left-center field, but the ball bounced in and out of the left-fielder’s glove and gave Martha’s Vineyard a 4-2 lead.

Martha’s Vineyard never looked back after this three-run sixth because their bullpen hurled 4.0 shutout innings to seal the deal. The Sharks’ relief pitchers struck out ten batters while only allowing two hits, and Camron Hill earned his second save of the year by striking out the side in the ninth.

Sharks’ relief pitcher Jack Beauchesne (2-0) earned the win by throwing 1.2 innings of shutout ball and striking out four Westerners’ hitters. Renn Lints (2-3) suffered the loss after giving up three runs (one earned) on three hits in the bottom of the sixth.

Sharks’ starter Ronaldo Gallo (1-0) got many swings and misses on his fastball, and he made clutch pitches to wiggle his way out of trouble in the last three innings of his outing. Gallo’s final line was 5.0 innings, two runs, three hits, one walk, two hit batsmen, and six strikeouts.

Westerners’ starter Aeden Finateri (0-0) went 5.0 innings, surrendered one run on five hits, walked two, and fanned four batters. The Georgia Tech product commanded his fastball early, and his ability to attack the lower half of the zone induced many groundball outs.

Westerners’ relief pitcher Jack Bowery extended his scoreless-inning streak to fifteen after throwing two shutout innings for his ballclub. The southpaw conceded two hits and struck out two batters in his appearance.

The Westerners will return to Rogers Park, and they will look to erase their two-game skid when they battle the North Adams Steeplecats on Saturday. Danbury blanked North Adams 5-0 on Tuesday thanks to the bat of Korey Morton, and they will try to improve to 4-0 against the Steeplecats this season. Cody Carwile will toe the rubber in this contest, and his first pitch will be thrown at 6:30 pm ET.