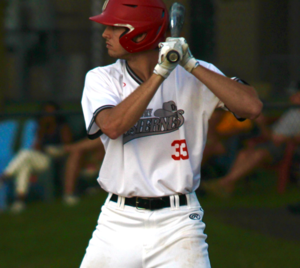 Danbury’s lineup sent ten batters to the plate in the fifth and exploded for five runs to outlast Keene 7-3.

The Westerners (10-11) completed the season sweep of Keene with the win, and the Swamp Bats (8-13) have lost eight of their last nine since starting the season 7-5.

Westerners’ left fielder Harrison Feinberg jumpstarted the offense by belting his third home run of the season in the fourth, and he barreled two other baseballs that were only a few feet away from being home runs. Feinberg’s final line was 1-4 with 2 RBIs and a run scored.

Westerners’ designated hitter Hank Thomas had a 2-5 night at the plate with 3 RBIs and a run scored, and shortstop Danniel Rivera went 1-2 with a double and two runs scored. Sam Mongelli also went 2-3 with a two-run single in the five-run fifth inning, and his first hit was the only base hit the Westerners recorded off Swamp Bats’ starter Noah Dean.

The Westerners tallied seven hits and improved to 8-2 this summer when scoring five or more runs.

“I told my guys to jump on the fastball early,” hitting coach Bobby Rodriguez said after the game. “We knew they would attack us with fastballs early in the count, so we geared up for them and barreled up a lot of baseballs.”

Swamp Bats’ third baseman Jackson Ross went 1-3 with a walk and a three-run blast in the sixth, and second baseman Dan Covino had a 2-4 night with a double and a run scored.

Alumni Field hosted a pitcher’s duel through the first three innings of the ballgame, but the Westerners emphatically threw the first punch on the offensive side of the ball. With one away in the top of the fourth, Westerners’ left fielder Harrison Feinberg launched a tape-measure blast into the center-field parking lot to give his team a 1-0 lead. Feinberg’s moonshot traveled 401 feet and came off the bat at 102 mph.

“It felt awesome to get the offense going,” Feinberg said after the win. “I’m seeing the ball better, and the hard work is starting to pay off.”

Feinberg’s fourth-inning bomb lit a fire into the Westerners’ lineup because they exploded for five runs in the top of the fifth. Westerners’ shortstop Danniel Rivera and right fielder Billy Gerlott walked to start the frame, and center fielder Korey Morton wore a fastball off the helmet to load the bases. After seeing a first-pitch ball, Hank Thomas delivered by hitting a sharp ground ball past the first baseman and down the right-field line. Two runners darted home, and Danbury extended their lead to 3-0.

Harrison Feinberg continued the scoring extravaganza by flirting with his second home run in as many at-bats. The Southern California product sent a ball to the warning track in right-center field, but it was caught right up against the wall. Korey Morton tagged from third and scored, so Feinberg recorded his second RBI of the night on the sacrifice fly and gave his ballclub a four-run lead.

The last two runs in the fifth came on a two-run single from Sam Mongelli. The Sacred Heart product smoked a base hit into the right-center gap, and both Hank Thomas and Mike Becchetti came around to score to put Danbury up 6-0.

Despite this comfortable lead, Keene showed some life in the bottom of the sixth. With one down and runners on first and second, Jackson Ross smoked a three-run shot over the right-field wall to cut the deficit in half.

Keene had some momentum going into the later innings, but Westerners’ relief pitcher Ethan Bradford (1-1) shut the door after throwing three scoreless innings and surrendering only one hit. The Westerners also gifted Bradford an insurance run in the ninth on an RBI single from Hank Thomas. Danniel Rivera roped a leadoff double into left-center field, and Thomas knocked him in with a base hit over the leaping try of the second baseman to make it a 7-3 ballgame.

Bradford thwarted any Swamp Bat attempt at a comeback, and he claimed the victory by fanning the last batter of the game. Bradford walked three but struck out two, and he worked into and out of a jam in the eighth when the Swamp Bats sent the tying run to the plate.

Swamp Bats’ relief pitcher Riley Skeen (2-2) suffered the loss after conceding five runs (three earned) over 1.1 innings. Skeen struck out three and allowed only two hits, but he walked two and hit Morton to start the five-run fifth for the Westerners.

Westerners’ starter Billy Oldham dominated against the Swamp Bats’ lineup. After getting into and out of trouble in the first, the right-hander from Eastern Connecticut State went on cruise control and retired the final nine batters he faced. Oldham went 4.0 innings, conceded one hit, walked one, and fanned six.

“Starting guys off with off-speed was working better than throwing first-pitch fastballs,” Oldham said after the win. “My fastball was missing arm-side, so throwing my off-speed for first-pitch strikes was key to going deep into the game.”

Swamp Bats’ starter Noah Dean turned some heads in his three innings of work. The southpaw was throwing heat from the get-go, and he only surrendered one hit, walked one, and struck out seven before being taken out of the game.

The Westerners will look to continue their winning ways when they travel back to Rogers Park and face off against the Newport Gulls. Braden Quinn will get the nod for the first time this summer, and his first pitch will be fired at 6:30 pm ET.