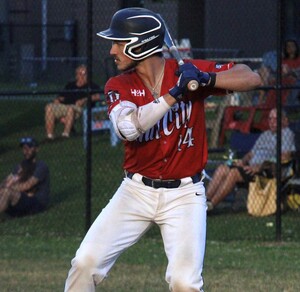 The Gulls scratched across three runs in the fifth, and their pitching staff ensured those would be the only runs they needed in a rain-shortened win over the Westerners.

Newport (13-8) now has a five-game winning streak, and Danbury’s (10-12) lineup failed to score a run for the first time this season.

Westerners’ shortstop Nick Romano went 3-3 with a double and two singles, and both Jackson Taylor and Sam Mongelli had 1-3 nights at the plate.

Danbury flashed the leather to keep the game scoreless for the first four innings. With a runner on first and one down in the top of the third, Gulls’ center fielder Colton Ledbetter drove a deep fly ball into center field. However, Jermaine White showed off his vertical by leaping over the wall and robbing a two-run shot. The defensive showcase continued in the fourth when Westerners’ second baseman Jackson Taylor laid out and snagged a line drive ticketed for right field.

Despite Danbury backing up their starter with these impressive defensive plays, the Gulls broke through in the top of the fifth. A single and a walk put two runners on with one down, and Alec Makarewicz roped a single into left field. One run scored easily, and a second run scored from first after the ball took a big hop and bounced away from the left fielder. The mishap allowed Makarewicz to advance to third, and Samuel Kulasingam knocked him in with a single to left to give them a three-run lead.

Gulls’ starter Collin Lowe retired the side in the fifth, and Newport’s bullpen would only allow one runner on base for the next three innings. The top of the ninth was about to commence, but the umpires pulled the players off the field due to heavy rain. The torrential downpour forced the umpires to call the game, which granted Newport a 3-0 victory at Rogers Park.

Collin Lowe (1-1) earned the win after hurling five innings of shutout ball, and Chase Renner claimed his first save of the season by throwing two scoreless innings. Lowe surrendered four of the Westerners’ five hits, but he walked none and allowed minimal traffic on the basepaths.

Westerners’ starter Braden Quinn (0-2) suffered the loss on Saturday night. The southpaw coasted through the first four innings, but the Gulls tagged him for their only three runs in the fifth. Quinn’s final line was 5.0 innings, three runs (two earned), two walks, and four strikeouts.

Westerners’ relief pitcher Logan Tabeling was lights out in his fourth appearance of the season. The right-hander threw three scoreless innings, conceded one hit, walked two, and fanned two batters.

The Westerners will look to bounce back when they travel to McKenzie Stadium and battle the Valley Blue Sox. Valley has won both games against the Westerners this season, and they sit a game ahead of them for second place in the West Division Standings. Aeden Finateri will toe the rubber for Danbury, and the first pitch will be thrown at 5:05 pm ET.