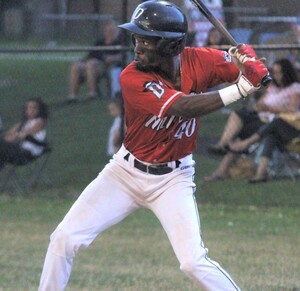 After falling behind 2-0, Danbury erased the deficit in the seventh and hung a three-spot in the ninth to defeat Valley 5-2.

The Westerners (11-12) bested Valley for the first time this summer, and the Blue Sox (11-12) lost their fifth consecutive game since defeating North Adams on June 27.

“We definitely needed this one,” Westerners’ center fielder Jermaine White said after the game. “Hopefully it can charge us up and get us going on a run.”

Westerners’ third baseman Nick Romano recorded his first four-hit night of the summer, which raised his average to .303 on the year. Romano’s final line was 4-5 with four singles and an RBI.

Jermaine White went 2-4 with two singles and a clutch sacrifice bunt in the ninth, and second baseman Mike Becchetti had a 1-3 night at the plate with a walk and 2 RBIs in his last two at-bats.

In the bottom of the first, Valley’s offense wasted no time getting on the scoreboard. Lucas DiLuca led off the inning by launching a no-doubter over the high right-field wall, and it gave Valley the early 1-0 lead. This was DiLuca’s first bomb of the year and his second RBI in as many games.

Valley made it a 2-0 ballgame in the fourth on a sacrifice fly from right fielder Chase Hanson. Antonio Guerrero started the inning with a base hit to right field, and he scampered to third on a failed pickoff move from the pitcher. The ball skipped past the first baseman and rolled into the right-field corner, so Guerrero turned on the jets and slid into third safely. With the corner infielders in and nobody out, Hanson drove a ball deep enough into right field to plate Guerrero and give his ballclub a two-run lead.

The Blue Sox pitching staff cruised through the sixth, but a shocking defensive blemish in the seventh allowed Danbury to tie the game in the blink of an eye. Westerners’ left fielder Henry Strmecki legged out an infield single to kick things off, and shortstop Danniel Rivera roped a base hit down the left-field line to put runners on first and second. After Chris DiFiore induced a fly-ball out, Mike Becchetti sneaked a ground ball past the second baseman and into right field for a base hit. The ball somehow rolled past the charging right fielder, and two runs motored around to even things up at 2.

Valley tried to answer in the bottom half of the inning, but Jermaine White had other thoughts in mind. Two straight hitters were granted a free pass with one away, and first baseman Steve Luttazi smashed what looked to be a potential RBI single into center field. However, White fielded it cleanly and fired a laser to gun down the runner at home plate and keep the game knotted up at 2.

“I was able to get to the ball quick enough to have a chance at getting him out, and the catcher backed me up with the pick,” White added when talking about this throw. “It’s great to help the team out whenever I can.”

After a scoreless eighth inning, the Westerners broke the deadlock by erupting for three runs in the ninth. A leadoff single and a hit by pitch put runners on first and second with nobody down, and Jermaine White moved both runners over with a sacrifice bunt on the third-base side of the mound. One batter later, Mike Becchetti knocked in the go-ahead run with a sacrifice fly to right field, and Danniel Rivera tagged up from second and advanced to third on the throw to home plate. Westerner’s right fielder Billy Gerlott drove in Rivera with a double down the left-field line, and Nick Romano capped off his outstanding night by yanking an RBI single down the right-field line. This turn of events gave Danbury a three-run lead, and Vincent Bianchi fanned two of the three batters he retired to complete the come-from-behind victory.

Westerners’ relief pitcher Sam Majewski (1-0) earned the victory by throwing a scoreless eighth inning, and Vincent Bianchi (1) recorded his first save of the summer by retiring the Blue Sox in order.

Blue Sox relief pitcher Terry Murray (0-1) suffered his first loss of the season after surrendering three runs in the ninth inning. He went 2.0 innings, coughed up those three runs on five hits, walked none, and struck out two.

Westerners’ starter Aeden Finateri had another sterling performance for his ballclub. After surrendering a home run to the first batter he faced, Finateri regrouped and did not allow an extra-base hit for the rest of his outing. His final line was 7.0 innings, two runs, six hits, three walks, and two strikeouts.

“My curveball wasn’t working too well, so I was throwing my fastball in and my palm ball away, and that was bringing me success,” Finateri said after the game. “I knew the defense had my back with every ball that was put in play.”

Danbury will rest on America’s birthday, but they will return to action on Tuesday night when they clash with Valley at Rogers Park. Cody Carwile will take the hill for the Westerners, and his first pitch will be thrown at 6:30 pm ET.