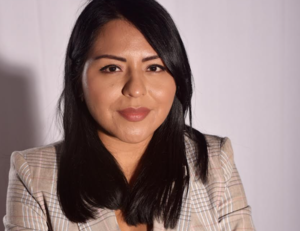 When Sheila Medina immigrated to the U.S. from Peru with her family at the age of 15, she arrived in an unfamiliar world in which she did not speak the language. While challenging, it did not prevent her from attending and graduating from West Hill High School in Stamford or from successfully enrolling at Norwalk Community College, where she completed an associate degree in Accounting.

Medina then turned her focus to the next hurdle she would surmount: where would she obtain a bachelor’s degree and how could she do it in the most cost-effective way?

Medina knew she didn’t want solely a bachelor’s in Accounting; she wanted to find a way to combine it with a minor that focused on technology, IT, coding and/or information security management. When she started looking at her options, she quickly realized that other universities placed Accounting in one school or division while IT was in another — making it virtually impossible to study both to obtain a major and minor simultaneously in about two years.

Medina, a first-generation student, started asking questions about how she could accomplish her goals, and one of her NCC instructors set her on the right path.

“My accounting professor told me about Western Connecticut State University and that my NCC credits would transfer there, and suggested I make some inquiries,” Medina said. “I spoke to Dr. Richard Montague, chair of WCSU’s Management Information Systems department. He told me I wouldn’t have to do a major and minor — I could do a double major in MIS and Accounting. Not only that, but everything was in one place in WCSU’s Ancell School of Business. This changed my whole idea of what I could accomplish!”

Prior to attending WCSU, Medina prepared tax returns in Trumbull as the firm’s only bilingual accountant. Once on campus, she became an Ancell Commons tutor, which allowed her to study, earn money and complete her double major in two years and three months. She also became president of the WCSU Accounting Society, a member of the National Society for Leadership and Success, and obtained a Leadership, Compassion and Creativity certificate.

As completion of her studies in December 2021 approached, Medina began applying for job opportunities.

“Before I graduated, I had an internship with a mid-size accounting firm called RSM, and worked there in the summer of 2021,” Medina said. “They offered me an opportunity to join the tax department as a business tax associate. I was also offered a job at the tax preparation office in Trumbull where I had worked after obtaining my associate degree. At the same time, I applied to Deloitte and received an offer to join them in the Risk and Financial Advisory department in Stamford as an analyst. The reason I chose Deloitte’s offer was that it allowed me to utilize my two majors in one place, and this was the opportunity I had been looking for since the day I decided to be a double major student.”

Medina participated in WCSU’s Commencement exercises in May 2022, and her family in Peru was able to watch the ceremony via live stream on the university website. She started her new job at Deloitte in July.

Looking back, Medina said, “It wasn't easy to give up time with friends and doing fun things while taking six classes a semester to make my goals real, but I think that with effort and commitment, it is possible to achieve anything in life. WCSU made it convenient in every way: a short commute; affordability; and professors who were easy to talk to, pushed me to do more and provided great advice. They encouraged me to join campus organizations and clubs, which gave me so many contacts and helped strengthen my resume. I paid my own way and received a grant from WCSU, so I am starting my new job loan- and debt-free. This is a big accomplishment and I’m ready for my new adventure feeling very blessed and happy.”