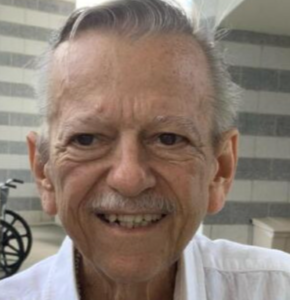 Born on September 6, 1945, John was the son of the late Konstantin and Julia (Kundrat) Mikla. Raised in Manhattan and later Elmhurst Queens, John attended Pace University where he earned a degree in Accounting.

During college John began his long career with Texaco as an accountant in the Comptroller's office. John married Adele in October 1968.

In 1976 John and Adele moved with their two oldest daughters to Danbury, where they have resided ever since.  As a longtime Danbury resident, John was involved with PAL soccer, a local Commodore 64 computer club (of which he was President), and Saint Nicholas Byzantine Catholic Church. John and Adele spent many weekends volunteering in the church’s bingo program.

John retired from Texaco in 2002 after nearly 40 years with the company. As part of his retirement, John attended the Culinary Institute of America in New York. His love of cooking found an even greater passion for baking bread. John enjoyed baking loaves for family and friends, even leaving them as surprises in the mailbox.

John’s cooking and baking skills also allowed him to volunteer for the baking needs of the Golden Dome Bakers at St. Nicholas Church. John also enjoyed utilizing the Danbury Public Library and was a frequent patron. He could be seen having breakfast each week with fellow retired Texaco employees at area restaurants and diners. John and Adele celebrated their 50th wedding anniversary in 2018.

John was preceded in death by his parents and his sister Annie (Bednar), as well as his wife Adele (2019). He is survived by his three daughters and their families, Julie and Cory Kushion and son Cameron of NYC, Kerry and Belgrave Henderson and their daughters Penelope and Sophia of Mount Vernon, NY, and Megan and Dan Winter and their daughter Sarah of Fort Myers, FL.

Family and friends will be received on Friday, August 12, 2022, from 4:00 PM to 7:00 PM at Jowdy-Kane Funeral Home; 9 Granville Avenue, Danbury with the Parastas prayer service offered at 6:30 PM. The Funeral Liturgy will be celebrated on Saturday, August 13, 2022, at 9:30 AM at St. Nicholas Byzantine Catholic Church; 13 Pembroke Road, Danbury. Interment will follow in St. Peter Cemetery; 71 Lake Avenue Extension, Danbury.

In lieu of flowers, donations may be made to St. Nicholas Byzantine Catholic Church, Danbury.