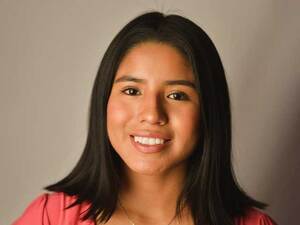 At age 11, Adamaris Loja, her father and sisters moved to Danbury from Ecuador after the untimely death of her mother. From her Osborne Street home, Loja was able to see and hear the hustle and bustle taking place at her neighbor, Western Connecticut State University’s Midtown campus. Being part of that community one day became a dream for the young girl adjusting to her new life.

“When I moved here, I needed to learn a new language, understand a new culture and make new friends,” Loja said. “Between those challenges and the loss of my mother, I became very introverted; but at Rogers Park Middle School, I had amazing teachers who supported me and taught me English.”

Loja went to Danbury High School, where she excelled at her studies with a 3.8 GPA and discovered her love of computers. When she graduated, she decided to fulfill her general education requirements at Naugatuck Valley Community College in order to continue to save money from her two part-time jobs to eventually transfer to WCSU. After a successful semester at NVCC, Loja had to pause her education due to family obligations.

During the spring and summer of 2022, Loja worked long hours at three jobs to save additional funds so that she would be able to focus on her studies once the fall semester started. She saw an advertisement for the American Dream Awards Scholarship sponsored by the American Dream Foundation created by Tribuna magazine and with encouragement from friends and family, decided to apply. The $3,000 scholarship, funded by Union Savings Bank, is awarded to an individual 16 years or older who is an immigrant or a child of immigrants living in the Fairfield County area, who has faced many challenges on their journey to achieve their American Dream.

“I had already applied to WCSU as a Management Information Systems major and was going to try to make it work without the scholarship, but when they called me over the summer to tell me I had won, I was crying with excitement,” Loja said. “Most of the students at Danbury High School apply because so many are immigrants or first-generation students, so there was a lot of competition.”

Coming back to college has been a big achievement, Loja said. “Mental health has had a very big impact on my family, and I felt like a failure when I didn’t finish what I started at NVCC. I love school, learning, homework — I’m a nerd — and now I’m encouraged and finally proud of myself. Losing my mom and having to help my family are no excuse for not finishing. My dad tells me he’s proud of me every day and he has supported me through everything. I just want to make him proud for all the sacrifices he’s made for me and my sisters.”

On her first day of classes, Loja’s boyfriend, a 2022 WCSU graduate, escorted her to each of her classes so she wouldn’t have to struggle to find her way around the campus she grew up next to. Loja said finally being able to attend her “neighbor” university has fulfilled her childhood dream. She’s a commuter student who literally walks across the street to school.

“It’s perfect for me,” she said. “The professors have been really good to me. I know after this, my life is going to change.”