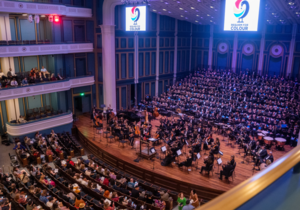 Music Education major Christopher Smith from Danbury performed in Belmont's Oratorio in front of an audience of more than 1,200 people. Ames led more than 450 students of Belmont's Oratorio and orchestra and invited an impressive ensemble of guests to participate in the evening's dynamic display of storytelling.

Culminated from an idea conceived more than a decade ago, Ames' labor of love pays musical homage to the sufferers and saviors, the casualties and champions of Black American peoples in a requiem or mass for the dead.

"We were a huge force of musicians who told the story in a unique manner," Ames said. "I truly believed God and African ancestors were pleased."

The premiere musical event was an unforgettable experience for all present, from listening in theater seats to singing to performing under the theater lights. What was meant to be a one night only performance is starting to grow legs with conversations about additional performances, nationally and internationally.