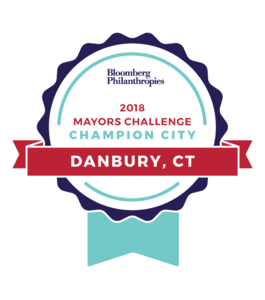 Out of 320 applicants, the City of Danbury is one of 35 finalists in the Bloomberg Philanthropies 2018 U.S. Mayors Challenge, a nationwide competition that encourages city leaders to uncover bold, inventive ideas that confront the toughest problems cities face. Danbury’s application, led by the City of Danbury in partnership with United Way of Western Connecticut (UWWC), rose to the top for our innovative approach to finding a solution to the lack of affordable childcare options for low-income families.

Danbury: A Focus on Affordable Childcare

Within the city limits, nearly 1,000 children attend unlicensed daycare facilities, because their parents have no other affordable alternative. The City of Danbury in partnership with UWWC will provide incentives and training to individuals who want to establish home-based childcare, thus reducing working parents’ reliance on unlicensed services or unaffordable options.

“Affordable childcare is a very real challenge for working families,” said Kimberly Morgan, CEO of UWWC. “Childcare is the one factor that can keep a family from working and maximizing their earning potential. The recognition of the Bloomberg Philanthropies award for this very real struggle for working families cannot be overstated. We are optimistic that the work we will accomplish through the pilot of the Bloomberg Philanthropy Mayor’s Challenge will demonstrate that the public and social service sectors can come together to create real, sustainable solutions for an issue as important as affordable childcare.”

The City of Danbury does not have an adequate number of childcare providers, and affordability for hard-working, struggling households keeps existing providers from being a viable solution for those families. Due to the lack of affordability, a number of unlicensed centers have sprung up throughout the city. Social service providers have noticed children entering schools with plagiocephaly (flat head syndrome), a condition which results from babies being kept in seats or lying on their backs for long periods. Further investigations determined that without regulation and oversight, well-meaning unlicensed daycares become overpopulated and subsequently become dangerous environments for children. While regulators have been attempting to shut down these daycares, due to demand, more of these unregulated centers continue to open.

Through collaboration with the City of Danbury, UWWC, local health officials, and Danbury’s Promise for Children Partnership, the group plans to support and establish shared services with newly licensed family childcare and existing providers over the next several years. These services include integrating health services like immunizations and reducing lead exposure and promoting healthy child development and parent involvement, as well as nutritious meals delivery services. Funding will be invested into the recruitment, licensing and establishment of family home daycares while reducing the overhead costs for providers and passing those savings on to families that are searching for quality, affordable childcare.

Next Steps for Champion Cities

As a Champion City, Danbury will now embark on a six-month testing phase, competing with the 34 other cities to conduct public prototypes of our idea with grant funding of $100,000. This “Test, Learn, and Adapt” phase includes personalized support from innovation experts. Following the test program, the City will submit a new application in August 2018 to compete for the grand prize to bring our ideas to fruition. Four cities will receive $1 million awards and one will receive a grand prize of $5 million.

“This grant will enable the City of Danbury and the United Way to partner with entrepreneurial and driven residents looking to start a business and make themselves self-sustainable,” said Mayor Boughton. “The benefit of this program is not only lifting families up, but also helping children gain access to affordable and quality childcare.

The Bloomberg pilot will help implement a core component of the Boston Fed’s Working Cities Challenge grant which was recently awarded to Danbury; to increase the amount of affordable quality childcare.