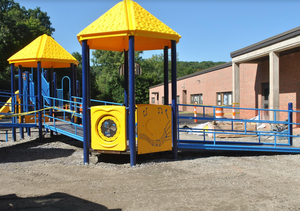 Editor's note: college intern Marrcus Danzy contributed to the reporting and writing of this story.

The new playground at Pembroke School is ready for play. The nearly $270,000 project is near completion after more than a year of tremendous effort and planning by school faculty -- and donations from the City of Danbury and many area schoolchildren.

On Wednesday, Sept. 25, at 5 p.m., school officials will hold a ribbon-cutting at the playground.

Pembroke principal Dr. Sharon Epple is excited about the progress made in order to make the playscape a reality.

“It looks like big Legos out there,” Epple said. “The goal of this playscape was to create a more accessible playground that would allow all students to fully enjoy the use of each piece of equipment and also to get all the kids to play together.”

Epple and Leigh Viviano, a former teacher at the school who is still involved with the project, spearheaded the project at an initial cost of $150,000. However, issues with drainage nearly made the project cost-prohibitive. The City of Danbury stepped up to help match the money the school had raised through fundraisers and donations, a move the City Council approved at its Aug. 6 meeting.

The new playground is unique in that it was built with a special concern for students who are challenged navigating older equipment. Pembroke has been selected to serve a number of students with disabilities in the district and, therefore, has six classrooms, one at each grade level (kindergarten through fifth grade) devoted to these students.

“Students with disabilities are going to be able to go up the same ramp as everyone else,” said Epple.

The colorful mostly blue and yellow playground has several playscapes with ramps and ladders and a spinner. One of Viviano’s initial concerns was that children with disabilities weren’t able to navigate equipment that was too high or steep. Some students may be prone to seizures, so the anxiety of tackling a dangerous incline can lead to serious medical issues. Children in wheelchairs must also be considered. The new playground includes platforms that are wheelchair-accessible.

Because there is no other accessible playground in the district – the closest being in Ridgefield’s Ballard Park and another in Brookfield – the playground will be open to anyone afterschool and on the weekends.