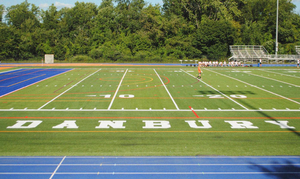 The brand-new athletic track and field facility at Danbury High School rivals those at some top universities. The finishing touches to the field were being completed last Friday as the Hatters boys’ soccer team took to the turf.

Last week, the eight-lane DHS track, which was completed in 2019, earned the title of “distinguished facility” by the American Sports Builders Association. The ASBA will name an “Outdoor Track Facility of the Year,” among its other awards, in December.

“The DHS Stadium is an exceptional multi-purpose facility that sets the bar for not only our athletic programming and for FCACI and CIAC championship events, but also enhanced physical education class instruction, regional band competitions, graduations and spectator viewing. Our new track and turf are together a beautifully finished product put together by many and we are all appreciative of a job well done,” said DHS Athletic Director Chip Salvestrini.

This is the school’s third field since 2001. Fields last an average of eight to 12 years.

“Between the track and the field, the DHS complex is up to the standards of any university of the Northeast. We had the track certified by the NCAA. It is a college-certified track,” said Tom Hughes, Danbury’s superintendent of construction services. “We anticipate this field lasting 12 to14 years before needing to be replaced,” Hughes said, adding that the field cost $985,000. “Danbury’s fields get extremely used. There are a lot of sports and the band uses it.”

The specialized top-of-the-line turf has filament that’s shaped like a lightning bolt and is much stronger than average turf. The field also boasts alternating shades of green, like a professional football field. The track is multiple layers of different gels that shed water and ice.

“It’s sort of cushioned,” Hughes said of the track. “You’re protecting children from shin splints. They – the student-athletes and coaches – were hesitant of the track and when they started using it, they loved it.”

Hughes and his staff, including Public Works Director Antonio and construction managers Rob Barone and Dan Reisert, “put our heart and soul into the facility and we are very proud of it.”

Hughes added lastly that the running surface on the track is the same as the track surface at UPenn, the same track where the Penn Relay is held every April for 20,000 runners.

“It’s a larger event than the Olympics, and we have the same running surface,” Hughes said. “This is top shelf.”