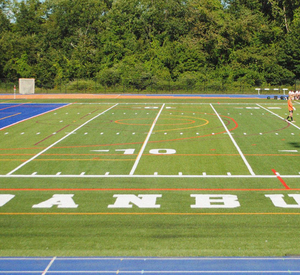 The Danbury High School running track was named a winner of the American Sports Builders Association annual award for “Distinguished Facilities – Outdoor Running Tracks.” DHS was one of four schools selected nationwide to receive the honor, which was announced on Dec. 6.

According to the organization’s website, awards are presented in various categories: Tennis Courts, Running Tracks, Sports Fields, Pickleball Facilities, and Track & Field Facilities. Projects are scored individually based on considerations such as layout and design, site work, drainage, base construction, surface, amenities, innovation, and overall impression. Winning entries are those whose cumulative scores meet or exceed the standard.

The athletic track and field facility at DHS, which were completed at the beginning of the school year, rival those at some top universities. The cushioned running surface is the same as the track at UPenn, where the Penn Relay is held every spring. The track is also made up of multiple layers of gels that shed water and ice.