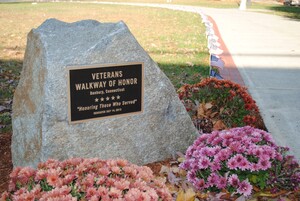 The Danbury War Memorial has restarted the popular veteran brick sale project after stopping sales in 2020. The decision was made in 2020 to end sales after the program was no longer profitable, however, Board President Bob Botelho felt that it was more important to see to it that our veterans were honored.

The Veterans Walkway of Honor was established in 2012 and is a permanent commemorative walkway lined with bricks engraved with the names of honored men and women who have served our great country. Bricks may be engraved with the name, rank and service branch of family, friends and loved ones who served honorably in the United States Armed Forces. Bricks may be in honor of those who are still living, missing in action, on active duty or in memory of those who are deceased.

Project Organizer Lee Teicholz stated, “I am glad that the war memorial is once again offering the bricksto the public and I am honored that they have asked me to lead the project once again.”

Teicholz also coordinates the Danbury Hometown Heroes Banner Program in the city, which held its dedication ceremony on Armed Force Day, May 21st at Danbury City Hall. When asked about the amount of time that would be required to manage two veteran programs in the city at the same time, he responded, ”I’m guess I’m just going to be very busy, but it’s well worth it for our veterans.”