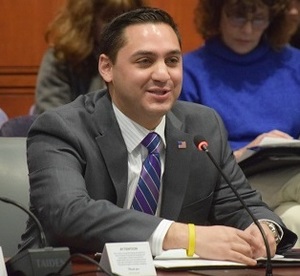 HARTFORD – State Rep. Michael Ferguson (R-138) advised residents of border towns in Connecticut to submit testimony in opposition to all legislation calling for installation of electronic toll booths on state highways in a public hearing to be held on Monday.  There are currently five bills which have been submitted to the General Assembly’s Transportation Committee that each call for a variety of ways to institute tolling in Connecticut.

“As a Danbury resident, I fully understand how putting tolls at Connecticut’s borders is a unique and massive detriment to families in businesses in border towns,” said Rep. Ferguson.  “All of these proposals submitted to the Transportation Committee to raise revenue from border tolls will unfairly punish people in border towns who frequently travel to neighboring states for work and to visit family.  In Danbury, businesses rely heavily on customers who can travel in from New York State without a hassle.  It is financially discriminatory legislation against certain commuters just because of the stretch of road they use for work and personal travel.  I have received countless emails, phone calls, and personal appeals from my constituents expressing their fear of expensive border tolls that would force them to pay for shortfalls in the budget.  None of the lawmakers who introduced tolling legislation represent towns that neighbor other states.  We need to stand together as a community and oppose all of these proposals.  On Monday, I want anyone who would be affected by tolls to make your voices heard at this public hearing.”

The Transportation Committee will hear testimony on the five bills calling for tolling on Monday, February 27, at 11:00 a.m. in the Legislative Office Building in Hartford.

Rep. Ferguson recommended residents of border towns who cannot attend the hearing in Hartford to submit testimony by email at  This email address is being protected from spambots. You need JavaScript enabled to view it. .  Residents must mention tolling legislation in their subject headers and include their name and town.  There is no limit on the length of written testimony.

Any questions or comments can be directed to Rep. Ferguson’s office by calling 860-240-1423 or by emailing him at  This email address is being protected from spambots. You need JavaScript enabled to view it. .