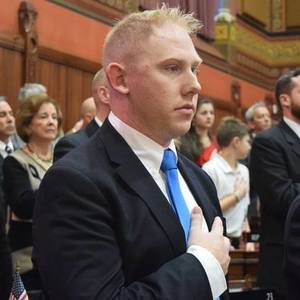 Stephen Harding, Connecticut State Representative for the 107th District, will announce his campaign for re-election at a kick-off event on Friday, Feb. 28, at O’Connor’s Public House in Brookfield.

Steve cited his love for the community as the basis of his decision to run for a fourth term.

“l will always put this community first and will never apologize for that,” Steve said. “I love doing this and it’s an amazing honor to represent the people of the 107th District and the community where I was raised and where my wife and I now raise our family.”

The 107th District is made up of Brookfield and portions of Bethel and Danbury.

During the campaign, Steve said, he will continue to push for solutions to Connecticut’s biggest problems.

“As a state we face daunting challenges,” he said. “We need to improve our business climate and be aware of the continuing tax burden placed upon our residents and businesses. I’m committed to working to find efficiencies in the state budget and to oppose any tax and fee increases as we move forward.”

Steve, 32, and his wife, Kelly, live in Brookfield with their son, Carter, and a golden retriever named Kennedy. He was admitted to the Connecticut bar in 2012 and has been practicing law for eight years.

Steve was first elected to represent the 107th District in a special election in February 2015. He is the ranking member of the Environment Committee and also serves on the Judiciary and Government Administration & Elections committees.

The official kick-off announcement at O’Connor’s Public House, 317 Federal Road in Brookfield, will begin at 7 p.m.

“I want the opportunity to continue to be the advocate in Hartford for my neighbors,” Steve said. “I believe in putting the people of the 107th first on all issues.”