Mayor Mark Calls Out Eversource, Wants to Break Up Monopoly 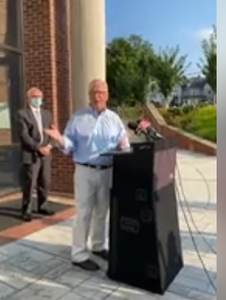 This morning, Mayor Mark Boughton continued fighting for the people of Danbury in the aftermath of Tropical Storm Isaias saying, "Eversource doing a victory lap this morning is laughable. It's like setting fire to a barn, waiting 8 days to put the ashes out and then saying Look at me! Look how great I am."

Mayor Mark offered this advice to the electric company, "Get the lights on, reimburse people for lost perishables, reimburse businesses for lost revenue, do not tack on the repair bill to future bills, speaking of bills, drop the new charges that have caused bills to skyrocket, cap CEO and executive compensation, then we can talk."

Boughton is committed to breaking up the flawed system. "Since you won't do those things, we need to break up a monopoly that doesn't work. Let's never forget."